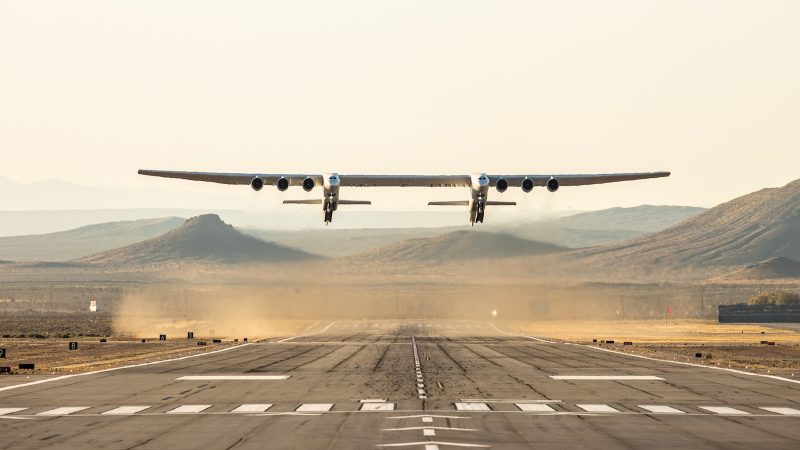 The Stratolaunch made its first flight, it became the largest flying aircraft in the world. Or, to be precise, the largest by measured wingspan. Depending on what you measure ‒ wingspan, nose-to-tail length, overall size, etc. ‒ the ‘largest aircraft in the world’ throne is a highly competitive one, and here is the list of aircraft with a legitimate claim to it.

Each of these aircraft can be and sometimes are, described as the world’s largest aircraft, making even Airbus A380 or Boeing 747 look rather tiny next to them.

H4 Hercules
Stratolaunch has inherited ‘the largest wingspan of any plane’ title from H4 Hercules. The aircraft, also known as Spruce Goose – a WWII-era, US-built eight-engine H4 Hercules wooden flying boat with a wingspan of 98 meters.

Spruce Goose has only flown once, but that was enough to set a world’s record which stood intact for 72 years. On November 2, 1947, it took off for a one minute flight, reaching an altitude of a little over 21 meters (70 feet) and covering approximately 1.6 km (one mile) distance.

Super transporters: Beluga XL vs. Dreamlifter
Both Airbus and Boeing have their special cargo planes, designed to carry composites of their regular planes, as you are probably well aware of. But between Airbus Beluga XL and Boeing Dreamlifter, which one is bigger?

However, there is one important twist to the story. Despite being smaller in size, Beluga XL actually has a bigger cargo hold (2,209 cubic meters versus Dreamlifter 1.841 cubic meters), thus snapping the title away from Boeing’s transporter.

Antonov AN-225 Mriya
The Antonov AN-225 Mriya, was developed at the end of the 1980s for the Soviet space program and flew for the first time in 1988. The specifications of the giant are even more impressive than those of the Dreamlifter. The length of Mriya is 84 meters, height – 18.1 m, wingspan – 88.4 m.

The longest-stretching Airlander 10
Another ‘world‘s largest aircraft’ is a 92-metre long (but only 43.5 meters wide) hybrid airship Airlander 10. Developed by Hybrid Air Vehicle, it completed the maiden flight in August 2016. However, several incidents followed. In November 2018, after breaking from its moorings, the aircraft deflated and fell to the ground, injuring two people. In January 2019, the company announced that it is retiring the prototype aircraft, however, it also said to have a green light to go into full production.