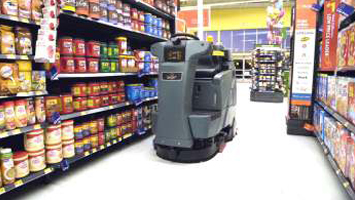 SAN DIEGO: If you’re shopping at Walmart, don’t be surprised seeing robots cleaning up the aisles as the world’s largest retailer opts for the unpaid machines to tidy up its stores across the United States.
The San Diego-based software tech company Brain Corp. says it’s providing AI services to Walmart’s fleet of commercial floor scrubbers with autonomous navigation and data collection capabilities, all tied into a cloud based
reporting system.

Walmart’s 360 BrainOS-powered machines should be all in operation by January 31, 2019. Brain Corp. explains store personnel will first take the machines to an initial training ride to quickly map a route before pressing a button to activate them to self-clean the aisles.

The robots use multiple sensors to scan its surroundings for people and obstacles, providing the industry’s highest level of safety and performance, Brain Corp said.

“We’re excited to work with Brain Corp in supporting our retail operations and providing our associates with a safe and reliable technology,” said John Crecelius, Walmart’s VP of Central Operations.

“BrainOS is a powerful tool in helping our associates complete repetitive tasks so they can focus on other tasks within role and spend more time serving customers.”

Dr. Eugene Izhikevich, CEO of Brain Corp., said the AI-powered machines can safely maneuver themselves even in crowded environments.

“BrainOS technology allows robots to effectively and safely function in complex, crowded environments, ensuring increased productivity and efficiency across applications. We look forward to continuing to work alongside Walmart to help build intelligent, connected stores,” he said in a statement.

Brain Corp. specializes in the development of intelligent, autonomous navigation systems for everyday machines. The company is funded by the SoftBank Vision Fund and Qualcomm Ventures.