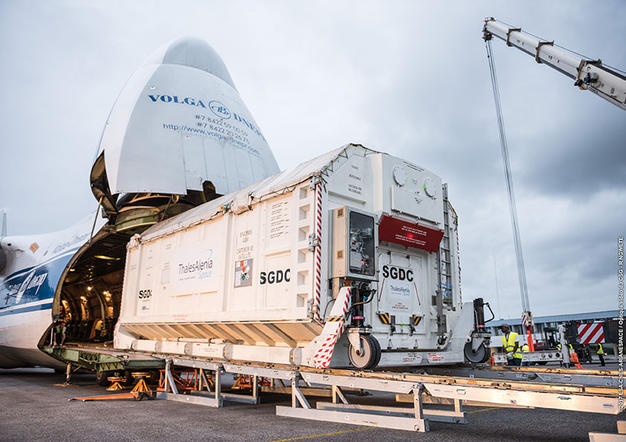 These latest An-124-100 flights demonstrated the international nature of the space industry with Volga-Dnepr working with leading French and French/Italian partners to deliver communications satellites for customers in Brazil, South Korea and Indonesia.

It was the first time Volga-Dnepr used new lightweight and easier-to-stow aluminium extension ramps to load and unload satellites. The new ramps weigh less and take up less space when stowed in the aircraft, which allows increased volume and payload for cargo when required.

Volga-Dnepr’s first flight for Bolloré and Thales Alenia Space in 2017 delivered the Telkom 3S satellite, built for the Indonesian operator Telkom Indonesia and launched on February 14.

This was followed by a 13-hour An-124-100 freighter flight from Nice to Cayenne carrying Brazil’s SGDC satellite and South Korea’s Koreasat 7 telecommunications satellite, also built by Thales Alenia Space. Volga-Dnepr’s expertise in moving space cargoes and its close working partnership with Bolloré Logistics and Thales Alenia Space guaranteed both satellites arrived safely at the Guiana Space Center to ensure preparations continued as planned for the dual launch on March 21 onboard the Ariane 5 launch vehicle.

The transport containers used to deliver the satellites have been specially designed to utilise the unique capabilities of Volga-Dnepr’s An-124-100 and have been used many times before for similar transportations for Bolloré and Thales Alenia Space.

Matthew Thear, Customer Service Manager at Volga-Dnepr, said: “Our long partnership with Bolloré Logistics and Thales Alenia Space means we have great experience and finely-tuned processes in place to move highly sensitive satellite technology. This includes minute-by-minute monitoring of temperature, pressure and vibration in flight. However, we are always looking for ways to advance the services we provide, and the latest development of the new loading equipment is further proof of that.”