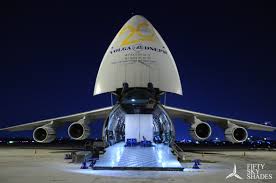 The payload module of a spacecraft represented Volga-Dnepr Airlines’ latest aerospace delivery when it arrived in the UK from Moscow.

The module and three tons of support equipment was flown from Sheremetyevo Airport to London Stansted onboard one of the airline’s IL-76TD-90VD freighters. The transportation was organised by DG Terminal.

Volga-Dnepr Airlines was chosen to operate the flight because on its combination of expertise in moving oversized cargo and carrying aerospace shipments. The airline was able to provide a unique technical solution to ensure safe carriage of the valuable and sensitive payload module, which was transported inside a special container.

During the flight, a specific temperature was maintained in the cargo hold and the pressure was constantly monitored to protect the integrity of the shipment. Three representatives of the manufacturer, RSC Energia, accompanied the cargo to personally monitor the transportation of the module, which arrived safely and on-time in the UK ready to be transported by road to its final destination.

Aerospace customers account for 30% of Volga-Dnepr’s annual business. To date, the airline has operated over 5,250 flights for customers in the industry, delivering nearly 175,000 tonnes of cargo such as satellites, helicopters, aircraft and parts.