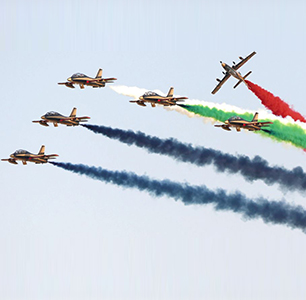 US$114 billion deals made at Dubai Airshow

DUBAI: Record deals worth more than $113.8 billion in new aircraft orders and lease agreements were made at the five-day Dubai Air Show 2017 with Boeing and Airbus dominating the market, officials announced.

The amount is nearly triple of what were ordered in 2015 with many airlines replacing their old fleet and opting for the more fuel-efficient planes. But it still fell short of the US$200 billion sales made in 2013.

The deals highlight the importance of the Middle East as an aviation market for manufacturers despite the geopolitical challenges in the region, experts said.

“The figures speak for themselves – it’s been another successful year. Dubai is geographically at the center of the global aviation world, & Dubai Airshow is where the sector comes to do business. We have seen incredible, unmatched deals, innovations and ideas,” said Michele van Akelijen, Managing Director of organizers, Tarsus F&E LLC Middle East.

Boeing estimated the new orders and commitments for 302 airplanes, including 50 options, at about US$50 billion at list prices.

“This has been a very successful show for Boeing. Our regional customers have maintained their trust in our products and technology, and our partnerships in the Middle East region continue to grow,” said Bernard Dunn, President, Boeing Middle East, North Africa and Turkey. 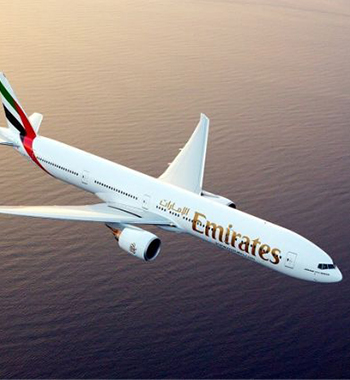 The US manufacturer secured orders for both commercial and defense aircraft with a host of airlines in the region and elsewhere.

“We signed agreements with key airline partners including Emirates, flydubai, Azerbaijan Airlines, ALAFCO and Ethiopian Airlines. In addition, Egyptair became a new customer for the 787. Finally the airshow was a great opportunity to introduce our newest business unit, Boeing Global Services, to the Middle East market and reiterate the importance of the region to the Boeing Company,” said Dunn.

Though the French company Airbus failed to secure orders from Emirates, it emerged victorious with a surprise order from the Arizona-based Indigo Partners for 430 A320 neo family planes worth nearly US$50 billion.

The new orders will be allocated among the ultra low-cost airlines Frontier Airlines (United States), JetSMART (Chile), Volaris (Mexico) and Wizz Air (Hungary) upon the completion of final purchase agreements between Airbus and the four airlines, Airbus announced.

The new (A321neo LR) will join Air Arabia’s existing fleet of 50 A320 aircraft that serve over 133 routes from five hubs in the UAE (Sharjah and Ras Al Khaimah), Morocco, Egypt & Jordan. 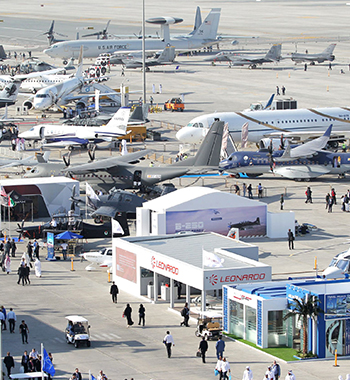 Bill Franke, Managing Partner of Indigo Partners, and John Leahy, Airbus Chief Operating Officer Customers, Airbus Commercial Aircraft, said in a joint statement that when added to existing Airbus A320 Family orders, the new agreement will make Indigo Partners one of the largest customers by order number in the world for the Airbus single-aisle aircraft family.

“This significant commitment for 430 additional aircraft underscores our optimistic view of the growth potential of our family of low-cost airlines, as well as our confidence in the A320neo Family as a platform for that growth,” said Franke. “Our airlines know that a great aircraft coupled with a great business plan will create value for our customers. We look forward to bringing comfort and low fares to more passengers around the world as Wizz Air, Volaris, JetSMART and Frontier continue to expand.”

“Indigo Partners have been a tremendous customer and supporter of the Airbus single-aisle fleet for many years,” said Leahy. “We are proud to augment their airline fleets in Latin America, North America and Europe with the single-aisle aircraft that offers the lowest operating costs, longest range and most spacious cabin: the A320neo Family.”

The A320neo Family incorporates the very latest technologies, including new generation engines and Sharklet wing-tip devices, which together will deliver 20 percent fuel savings by 2020.

With more than 5,200 orders received from 95 customers since its launch in 2010, the A320neo Family has captured nearly 60 percent market share.

The airline which is also the largest 777 Boeing operator will receive its 777X in 2020.

Emirates says it chose Dreamliners because of its 25 percent better fuel efficiency per seat and emissions capabilities.

His Highness Sheikh Ahmed bin Saeed Al Maktoum, chairman and chief executive of Emirates Airline and Group, said Emirates orders will be delivered from 2022, taking the airline well into the 2030s.

“Some of these will be replacements so that we maintain a young and efficient fleet, and others will power our future network growth. We see the 787 as a great complement to our 777 and A380 fleet, providing us with more flexibility to serve a range of destinations as we develop our global route network,” he said.

Boeing Commercial Airplanes President & CEO Kevin McAllister described the Boeing 787-10 Dreamliner “as an airplane that will set a new benchmark for operating economics in the commercial aviation industry when it enters service next year.”

flydubai is expanding its network with the purchase of US$27 billion 225 Boeing 737 MAX aircraft, including 50 options. This is the airline’s third aircraft order in its eight-year history.

The Dubai-based flydubai marked its fifth Dubai Air Show by unveiling its brand-new Boeing 737 MAX 8, the first of its 76 orders, scheduled to be fully delivered by 2023.

Six of these aircraft will join the flydubai fleet by the end of the last quarter of 2017.

“We are gearing up and putting the final touches to these new aircraft which will improve our overall fleet performance, bring more flexibility and efficiency to our operations and further support our commitment to opening up new destinations, whilst delivering an exceptional onboard experience for our passengers,” said flydubai’s Chief Executive Officer Ghaith Al Ghaith, commenting on the arrival of the MAX 8.

flydubai’s new Boeing 737 MAX 8s will initially be deployed on the furthest points on the carrier’s network. Destinations including Bangkok, Prague, Yekaterinburg and Zanzibar will be among the first to be served by the MAX 8. The additional aircraft being delivered over the next few years will be rolled out across the fleet and will become available on most of the routes on the network.

Since the beginning of 2017, flydubai has launched six new destinations and grown its network to more than 95 destinations, increased the schedule to more than 1,700 flights per week as well as rolled out its new uniform worn by more than 2,500 uniformed staff.

Egypt’s national carrier, Egyptair signed a letter of intent (LOI) for up to 24 CS300 aircraft with Canada’s Bombardier Commercial Aircraft.

The deal includes 12 CS300 aircraft with purchase rights for an additional 12 aircraft with their firm order contract valued at US$1.1 billion.

Should EgyptAir also exercise the 12 purchase rights for CS300 aircraft, the contract value would increase to nearly $2.2 billion.

“It is our pleasure to have this new partnership with Bombardier, which came as a continuation of our fleet modernization strategy. We undertook a thorough evaluation process of our fleet and realized that the CS300 would fit perfectly into our business plans and growth strategy,” said Egyptair Chairman & CEO Satwat Musallam.

He said the C Series aircraft serves best their domestic and regional destinations, including neighboring Arab cities in the Middle East.

Fred Cromer, President of Bombardier, said: “We’re thrilled that EgyptAir selected the CS300 aircraft to renew its fleet. Bombardier’s 20-year market outlook foresees demand for 450 airplanes in the 60- to 150-seat category for the region and this LOI confirms the need for right-sized aircraft in the Middle East.” 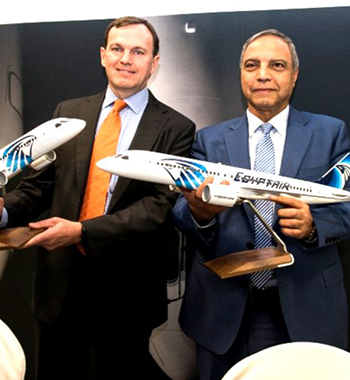 Established on May 7, 1932, Egyptair was the first airline in the Middle East and Africa and the seventh in the world to join IATA.

The additional planes are due for delivery in 2019 and will be used for high density routes as well as in Southeast Asia and Africa.

“We continue to witness growth in passenger traffic across our hubs and remain focused on our business model and mission to provide affordable fare and value for money to passengers. The addition of A321neo Long Range aircraft allow us to expand our service to longer range destinations and helps offer more flexibility in our existing high density routes,” said Adel Al Ali, Group Chief Executive Officer of Air Arabia.

The new (A321neo LR) will join Air Arabia’s existing fleet of 50 A320 aircraft that serve over 133 routes from five hubs in the UAE (Sharjah and Ras Al Khaimah), Morocco, Egypt and Jordan.

“With its unique customized interior and passenger comfort, the aircraft will enable Air Arabia to continue to innovate and lead the low cost air travel market in the MENA region while providing its customers with a great value driven product,” he said.