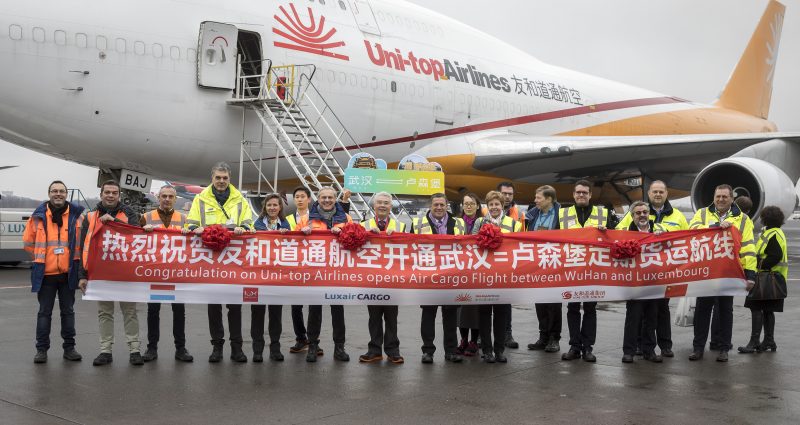 Wuhan based Uni-top Airlines recently started their new scheduled service between their hub in Wuhan and Luxembourg. The three weekly flights is operated with a leased B747-400.

The event was officially celebrated on Tuesday the 15th of January at Luxembourg Airport. The flights will connect the busy capital of the Hubei province, located in Central China, to the European markets. The three weekly flights will land in Luxembourg early morning on day 2, 4 and 7 and leave after a regular ground time back to Wuhan. Uni-top Airlines will also benefit in LUX of the extended and efficient trucking network to connect to all major European hubs as well as to arrange direct deliveries to their major customers. The central location, the state of the art infrastructure as well as the renowned ramp and warehouse handling services by LuxairCARGO have been decisive arguments for LUX.

In fact, in 2007 already, Uni-top Airlines established their European headquarter at the Luxair Cargocenter. During the early years, Uni-top organized series of charter operations through Luxembourg using various carriers to perform the flights. Today Uni-top Group is the leading logistic provider in Central China providing warehousing, trucking, airfreight and express services. They currently operate on the domestic and intra-Asia routes seven (7) A300-600 aircraft. Part of their newly added capacity is being managed by China Merchant (affiliated company of Sinotrans) which is also based in Luxembourg and has their offices at the Cargocenter. The official ceremony of the opening of the new route was celebrated in presence of the local manager, Mr. Leo Guo and his entire staff as well as representatives from the Luxembourg Civil Aviation, Luxembourg Customs and the Police. The CEO of Luxair Group, Mr. Adrien Ney and Laurent Jossart, Executive Vice President of LuxairCARGO welcomed Uni-top Airlines at the Cargocenter and both are looking forward to a fruitful long term cooperation between the two companies.