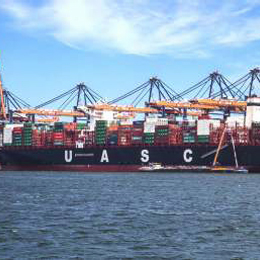 DUBAI: The multibillion-dollar merger of Hapag-Lloyd with United Arab Shipping Company Limited (UASC), a Dubai International Financial Centre (DIFC) company, was recently completed.
With 230 vessels and a combined turnover of approximately US$12 billion, the combined entity will be the 5th largest liner shipping company in the world. Their merger was described as one the largest ever mergers involving a DIFC company or any company based in the Gulf region.
UASC was established in 1976 by six shareholding states as a supranational legal entity formed pursuant to a state treaty. To make the merger possible, UASC was first re-domiciled to the DIFC.
UASC has also utilized a number of innovative Intermediate Special Purpose Vehicles (ISPVs) and Special Purpose Companies (SPCs) structures that were made available via the center.
Arif Amiri, Chief Executive Officer of DIFC Authority, welcomed the merger, saying: “The move underlines how DIFC is quickly developing as a domicile of choice thanks to its experience in supporting companies with innovative structured finance transactions.”
Jorn Hinge, who led UASC as Chief Executive Officer until the closing, said, “Choosing DIFC as the jurisdiction for UASC in preparation for the merger is testament to our confidence in the center as an important enabler as the combined entity moves forward in its regional, and global, growth strategy. The DIFC is an attractive choice in a number of ways, offering a range of benefits, providing access to 100% foreign ownership, zero tax, DIFC law and DIFC infrastructure.”