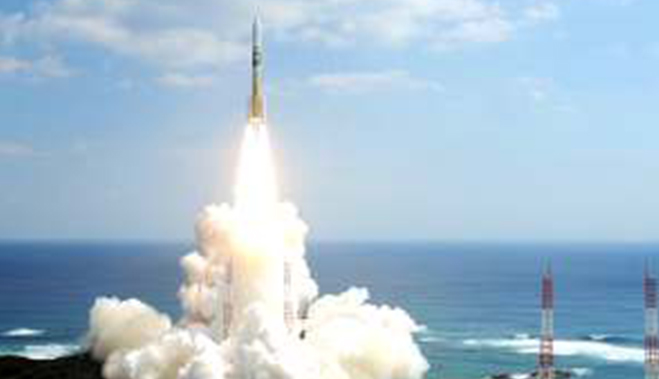 “We followed with great pleasure and pride today the news of the successful launch of Hope Probe, whose idea was developed within our national and research institutions and was designed and manufactured with the effective participation of a young national elite of bright minds – highly qualified and trained and sincere young Emiratis.”
– President His Highness Sheikh Khalifa bin Zayed Al Nahyan

“The UAE has created history with an unprecedented Arab space achievement. We rely on the UAE’s youth and they never disappoint…they have made us all proud and have ushered in a new era in our history.”
-His Highness Sheikh Mohammed bin Rashid Al Maktoum, Vice President, Prime Minister and Ruler of Dubai 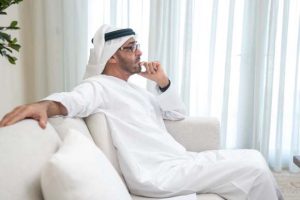 “We are going to Mars because the UAE wants to be at the forefront of the Arab scientific movement. Our journey to Mars is a message of hope to all Arabs that we can compete with the world in science and technology. The UAE today leads the Arab knowledge transformation. We are going to Mars because we want to start a new journey for our country. The journey of the next 50 years and the last 50 years that passed in the history of our nation. We started from the desert of our country, and we want the next 50 years to start from the desert of Mars, because we are people who don’t know the impossible, and nothing can stand ahead of our rising ambitions.”

DUBAI: Conceived in the deserts of Dubai, the UAE made another history for the Arabs and the world when its own spacecraft blasted off from Japan’s Tanegashima Space Centre at exactly 01:58 am on Monday, July 20, on a mission to explore Mars.

Hours after taking-off, the UAE Space Agency and Mohammed bin Rashid Space Centre announced the Ground Control station located in the Al Khawaneej area of Dubai has successfully received the first transmission from “Hope Probe” at 03:11 am, instilling pride, hope and joy to the young Arab nation and its entire population.
Hope Probe will take seven months to travel 493 million km to reach the Red Planet. It is expected to reach its Mar’s orbit in February 2021 marking the 50th anniversary of the UAE.

It will remain orbiting Mars for an entire Martian year, 687 days, to gather sufficient data and study its atmosphere. A single orbit around Mars will take the Probe 55 hours. Apart from demonstrating the UAE’s capabilities in the field of interplanetary exploration, the Probe is also positioning the country as a beacon of progress in the region.
China and the United States also plan to launch their own missions scheduled for July 2020. 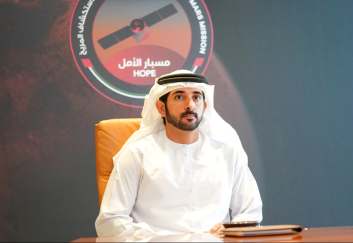 President His Highness Sheikh Khalifa bin Zayed Al Nahyan hailed the launch of the Hope Probe on its historic journey to Mars under the slogan of “Nothing is impossible” saying it constitutes a national and Arab achievement and an advanced Emirati push in the process of building global knowledge in space.

“We followed with great pleasure and pride today the news of the successful launch of Hope Probe, whose idea was developed within our national and research institutions and was designed and manufactured with the effective participation of a young national elite of bright minds – highly qualified and trained and sincere young Emiratis,” His Highness Sheikh Khalifa said in his speech.

“On this glorious day, we remember the late Sheikh Zayed bin Sultan Al Nahyan, and his brothers, the Founding Fathers who laid the solid foundation for a country capable of moving towards the future in confidence and appreciation,” Sheikh Khalifa concluded, expressing his thanks to the national team, international partners, and everyone who contributed to achieving this national dream. 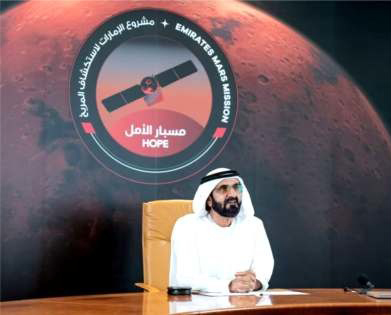 His Highness Sheikh Mohammed bin Rashid Al Maktoum, Vice President, Prime Minister and Ruler of Dubai, tweeted: “We proudly announce the successful launch of the Hope Probe. The Dubai ground control station has received the signal from the probe after its solar panels were successfully deployed to charge its batteries.”

In a separate tweet, His Highness Sheikh Mohamed bin Zayed Al Nahyan, Crown Prince of Abu Dhabi and Deputy Supreme Commander of the UAE Armed Forces, said: “We watched the successful launch of the Hope Probe to Mars with pride and joy, as we embark on a new chapter in space, led by our exceptional youth. Congratulations to the UAE for this historic achievement.”

“There is no “impossible” where there is faith and strong will,” remarked Sheikh Hamdan bin Mohammed bin Rashid Al Maktoum, Crown Prince of Dubai and President of the Mohammed bin Rashid Space Centre (MBRSC).
Hope Probe went through many tests and preparations prior to its lift-off which was twice postponed due to bad weather. This included filling the fuel tank with about 800kg of hydrogen fuel, checking the tank to ensure that it has no leaks, as well as checking the communications systems, moving the spacecraft to the launch pad and charging the batteries.

Well-wishers poured in to the UAE with its latest feat, including that of NASA Administrator Jim Bridenstine who tweeted: “Congrats to the team that worked on @HopeMarsMission. It’s truly amazing what @uaespaceagency & @MBRSpaceCentre have accomplished in such a short time. Hope is exactly what the world needs and thank you to the UAE & @mhi for inspiring all of us.”