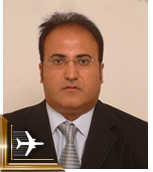 Two new board members, representing the ground handling and cargo carrier sectors, have been appointed to the TIACA Board of Directors.

“TIACA represents the air cargo supply chain globally, and Ramesh and Sanjeev will help to expand the links with the regions which are fast developing and are very important for the air cargo industry – Asia and Africa,” said Vladimir Zubkov, Secretary General, TIACA.

The new appointments come as TIACA prepares to host its Executive Summit, which takes place at the Turnberry Isle Resort and Golf Club in Miami, USA, from 18th to 20th October, and features a track on Latin America.

Prior to that, he was Senior Management Consultant for Eicher Consultancy Services Ltd, based in Mumbai, India.

Gadhia launched cargo carrier Astral Aviation in 2000, which has grown to become the largest private cargo airline in Eastern Africa, boasting a fleet of B747-400F, DC9F, B727F and F27 freighters.

Gadhia is also Vice Chairman of the Cargo Task Force for AFRAA, which is Africa’s largest airline association and promotes co-operation in operational, commercial, technical, and training fields.