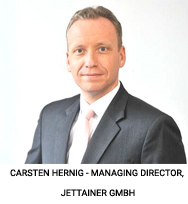 Carsten Hernig first had a brush with the air cargo industry in his 10th grade as an intern. He was so fascinated with air freight that he even made a thesis about it and eventually built his career in the industry.
Today, Hernig is the Managing Director at Jettainer GmbH, a subsidiary of Lufthansa Cargo AG. Headquartered in Germany, the company is considered the global market leader in outsourcing solutions for so-called Unit Load Devices (ULD) management operating at more than 450 airports around the world.

“There was something exciting about it (air cargo) making me stick to it. Hence, it was just logical to stay in the industry,” Hernig told Air Cargo Update in an email interview.

Hernig keeps a busy schedule all-year-round that also involves a lot of traveling across the world.
“Working in a small but global company like Jettainer is always majorly driven by proactively reacting to customer wishes and market developments. Hence, the daily job routine is always a balance of managing the new versus driving structural projects forward. And my job demands a lot of traveling in order to have my ear on the pulse of our customers,” the head of Jettainer said.

Though his job extends globally with Jettainer’s reach to hundreds of airports, Hernig still finds time to relax with his most prized possessions: His family of five, his sports, his motorbike and his old Citroen.

How do you handle stress in a very competitive industry? I have a fantastic family, I go running almost daily – this is relaxing and at the same time the source of creativity. And I like to ride my motorbike. Additionally, we travel a lot as a family. This keeps our minds open and it is the best education for kids to be open for other cultures. This is particularly important in these times, where unilateralism is threatening to replace amicable forms of cooperation of the human race.

What is it about vintage cars and motorcycles that you like? Do you collect them? Well, I personally drive a Citroen DS from 1973 and my wife a 2CV. Both cars have been revolutionary. The DS has been an incredible step forward in technology at the time and the 2CV has given affordable mobility to the masses. Hence both cars have dramatically changed human mobility. Hence, I believe it’s worth to conserve them for the future. From my time in India, I still own a vintage Royal Enfield bike, a bullet built in ’64. Again, a vehicle which has impacted the development of a whole subcontinent. At the time, when these vehicles have been developed, great minds have been behind them. They had a vision for which sometimes have been offended. But at the end, they had the right entrepreneurial feeling and did make a significant impact on development.

We heard you’re a huge aviation enthusiast. How do you satisfy this? I am not flying planes, but I have to admit that I am frequently on flight radar. I read a lot about aviation and sometimes, I do spent hours with my son at the runway of some airports to spot planes.

Further, I do fly a lot as a passenger for business and private travel, and it has never become a commodity to me. Every time the plane accelerates on the runway, I do feel thrilled – at the end there is a lot of complexity behind every flight, be it in terms of technology, commercial network planning, loading, etc. Many hands have to work together in sync to make a flight happen. This is fascinating. And so is the fact that we as humans would not be flying, had there not been some enthusiasts who started to jump from hills with simple gliders. Everyone laughed at them and considered them idiots. But look where we are: It requires people with a vision who think out of the box to make things happen!

If you were given the chance to meet someone, who would it be and why? I am happy meeting the people who are crossing my way. My first boss told me: “You have to be interested in human beings behind name” – this is what counts, and which makes every person interesting.

Please share some philosophies that helped you sail through life. First: I always give trust a chance over skepticism. On a base line, the only connecting factor between all people is the fact, that we are humans. If you take this as a basis for cooperation, it should bring us forward. Second: Doing whatever you do, even if sometimes it’s totally stupid and useless, is much easier, if it is done with passion. Third: When we lived in India, someone told me: “At the end everything will be good and if it is not good – it is not the end yet”