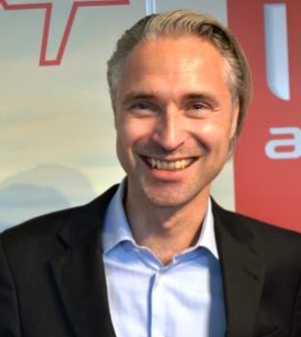 Growing up in East Germany as a child and teenager, René Steinhaus was trained to focus on education early on.

He survived tough rules by being with like-minded circle of friends who honor an unwritten rule to help each other no matter what happens.

His focus was on math and science and learned at an early age how to ﬂy a plane, which eventually shaped his adult life.

“I came from East Germany and there you get to be trained as a pilot early,” he recalled.

By the late 1980s, the Cold War began to thaw in Eastern Europe. On November 9, 1989, East Berlin’s Communist Party agreed to allow the free movement of people from the country to West Germany and people like René couldn’t be happier.

The collapse of the Berlin Wall led to the German Reuniﬁcation in 1990, providing opportunities for East Germans to rebuild their lives in a Democratic way.

René decided to pursue aviation and aerospace engineering at the Technische Universität Berlin or TU Berlin, a prestigious research university that has produced topnotch scientists, thinkers and engineers.

Eighteen years since becoming an aviation and aerospace engineer, René has successfully maneuvered his way to the corporate ladder in Europe, entrusted with high positions at Germany’s Fraport AG, the global American consulting ﬁrm A.T. Kearney and most recently with Lux Airport in Luxembourg.

Currently the commercial director at Lux Airport, René has his sights on higher goals to further grow passenger and cargo trafﬁc at one of the busiest airports in Europe.

Like most busy executives, René also tries to balance work and family life. In this edition, he shares with Air Cargo Update some of his thoughts on living.

How do you spend your free time?

With my family. My son is 17 years old and we like to go by boat. We go to the winery at every opportunity. When we’re in Germany, we drive around. What else? Wind
surﬁng. In the summer, we go to the Mediterranean.

Any kind. Different music is good. I’m not hooked on any particular one.

What is your favorite book?

It’s a long time ago but I love “Star Wars.” In East Germany, it’s not permitted to read that book so I got one illegally. I also like “Great Expectations” by Charles Dickens. I love it.

If you were given a chance to meet a famous person who would it be and why?

Michael Douglas because he looks like my father (laughter).

Name some places you want to visit.

Dresden City in Germany. I love going there. It has nice buildings and vineyards like Luxembourg. The people are nice. The structure of the city is really good. You can go biking. Dubai is also a good place to visit. It’s a very fancy city. I also want to go to Rio de Janeiro in Brazil, Tokyo and San Francisco. Those are the list of cities I want to visit.

My car (a Mercedes Benz). My smart phone because it’s my link to my family, including video, whenever I travel. My credit card, of course.

To be honest, I don’t use any quotations. I just live.