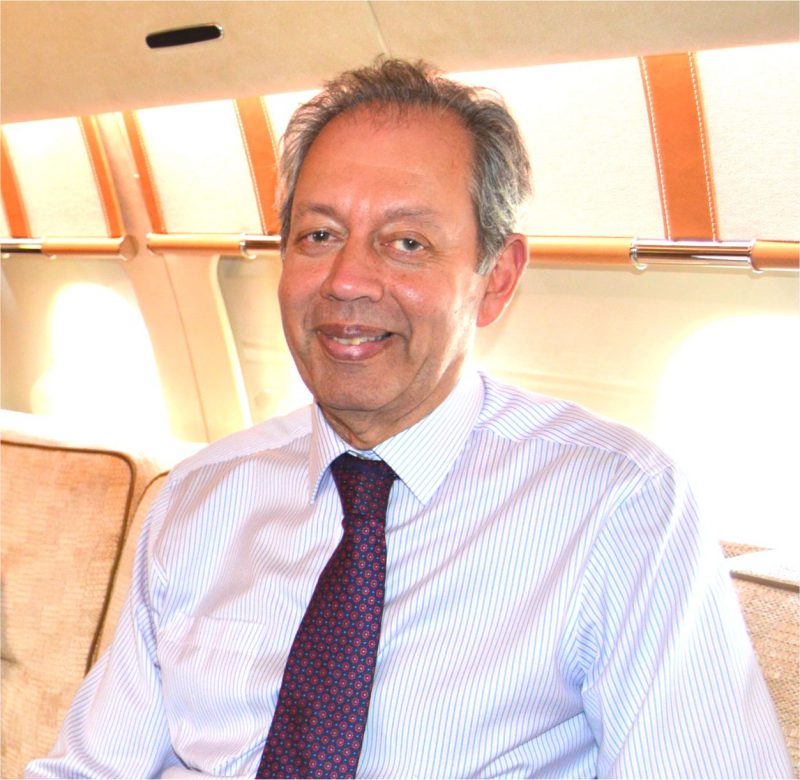 The aviation marketing guru with affinity for spacecraft and Neil Armstrong

Sitting comfortably in a sofa inside the huge Airbus Corporate Jet (ACJ) displayed at the recently held the Middle East and North Africa Business Aviation Association (MEBAA) Show in Dubai, David Velupillai met with Air Cargo Update and looked back at his over 40 years aviation career.

With the Airbus team, Velupillai flew aboard the luxurious jet for the show, one of the perks of being with the world’s second largest space company and the top 10 in defense.
“We were lucky enough, the team and I, flew in this aircraft from Europe,” says David on flying with the latest model of ACJ. “The thing about an airbus corporate jet is it got this comfortable space. You have a much better travel experience because you can talk face to face with people. The cabins are wide and tall so it’s very easy to move around.”

David has worn many hats in his long and illustrious aviation career which began when he completed his Bachelor of Science (BSc) Honors Degree in Aeronautical Engineering from Bristol University in the UK. After graduation, he worked as design engineer at the Hawker Siddeley Aviation, Hatfield.

He also worked as aviation journalist reporting on airlines, avionics, engines and spaceflight, eventually becoming the technical editor of the Flight International Magazine in 1978.

In 1984, he joined the Airbus Press Department in Toulouse where David says he had the “opportunity to share in, and communicate on, the birth and evolution of all of the modern Airbus airliner families, from the A320, through the A330/A340 and A350, and up to the double-deck A380.”

In 2006, David was promoted Marketing Director for Airbus Executive & Private Aviation where he was mainly involved in marketing all of the company’s corporate jets. He is currently responsible for Airbus Corporate Jet Communications worldwide.

With his engineering background, journalistic experience and fluent spoken French and English, David thrived in the corporate world of Airbus, flying in style to as many cities as you can possibly think and meeting topnotch names in global business, entertainment and politics.

His journey from engineering to journalism unto the corporate media may have been farfetched but David is content and happy with the turn of events and the many surprising ways it has rewarded him.
David shares his favorite poem is “The Road Not Taken” by Robert Frost which talks about designing your own path.
In his spare time, David says he spends it doing models of aircraft and spacecraft. “I’m interested in all kinds of aviation and space so at home I’m making models of spacecraft. I’m also a fan of the moon landing.”
Neil Armstrong, the American astronaut who made history on July 20, 1969 as the first man who landed on the moon, is his personal hero.

Asked why, David says: “Neil Armstrong is somebody who is quite reticent. He didn’t say very much. He’s an engineering test pilot. He’s someone who has overcome so many personal tragedies. One of his children died at a young age and his house burned down in a fire. But despite all this, he did fly to the moon.”
“He’s a modest man with many great achievements and accomplished great things.”