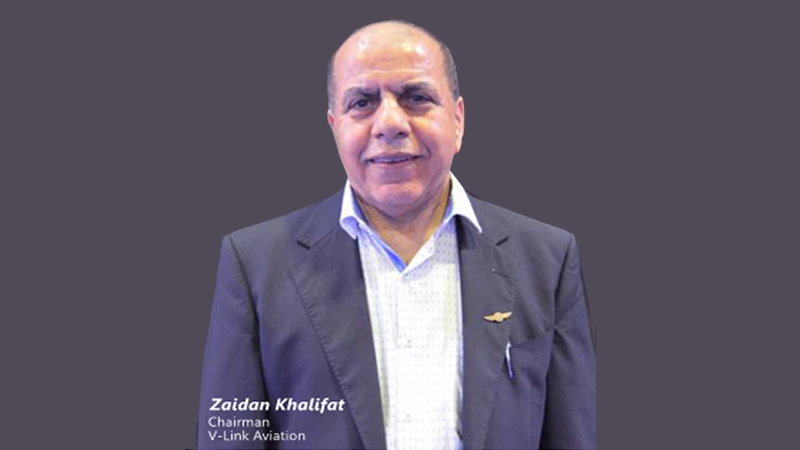 The aviation chairman who loves spending time with his family

Jordan is synonymous to Petra, the world famous historical and archaeological city in the southern part of the country admired for its rock-cut architecture and water conduit system dating possibly as far back as the 5th Century BC.

In modern times, the country is well-known for its strong link to the aviation industry with so many Jordanians wanting to become a pilot or work in the sector following in the footsteps of the late King Hussein, himself a pilot.

Zaidan Khalifat, Chairman of V-Link Aviation, was among the Jordanians who ventured into the aviation industry. After earning his Bachelor’s Degree in Aeronautical Engineering, he began his aviation career with Jordan’s national airline, Royal Jordanian, where he spent 33 years, retiring as Director of Quality Assurance.

But the allure of working for the aviation industry prompted Khalifat to continue working for other airlines in Lagos, Nigeria and in Dubai, where he eventually set up his own firm in 2017, the V-Link Aviation.

“Anybody who works in the aviation industry for more than five years wouldn’t want to leave. It becomes part of your DNA,” shared Khalifat who also took up Master’s in Public Administration at Bangalore University.

Khalifat said it’s not the constant travel that makes one stay in aviation but rather its dynamic nature.

“The industry is very dynamic. There’s always something new, especially in terms of technologies. If I’m given more time, I would love to continue working in the aviation industry,” he said during an interview at the recently held two-day AIME-MRO 2020 in Dubai where his company was among the 330 exhibitors.

Based at Dubai Airport Free Zone, V-Link Aviation provides GSSA services, supplies international spare parts, consumable and rotable components, lubricants and other materials related to the aviation industry. It also provides charter flights to Africa and Afghanistan, among other products and services.

This Jordanian aviation leader with more than 40 years of progressive experience in the field who nurtured many talents over the years sees the industry continuously growing in the coming years and for him adhering to quality standards matters most to survive.

Busy as he seems, Khalifat still finds time to relax with the company of his family whom he loves discussing business and other matters.

For now, this doting grandfather will continue to keep up with his busy schedule while inspiring others around him to reach out for their dreams without compromising precious moments with their families.