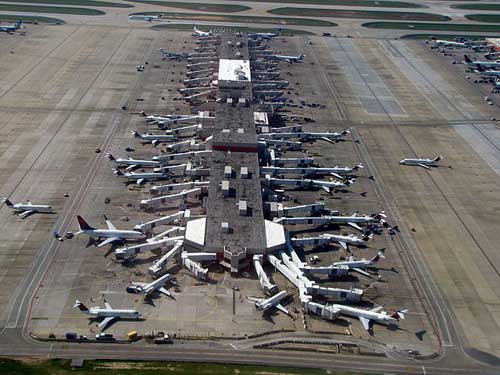 According to Financial Express, the latest list is based on preliminary aviation traffic results from 1,144 airports worldwide and compiled by Airports Council International, a global trade representative of the world’s airports

Hartsfield–Jackson Atlanta International Airport
The airport is locally known as Atlanta Airport, Hartsfield, or Hartsfield–Jackson. Growing by 5.5% year over year in passenger traffic to the record-breaking total of over 100 million passengers in 2015, Atlanta has benefited tremendously from its strategic location as a major connecting hub and port of entry into North America. The airport is within a two-hour flight distance of 80% of the US population.

Beijing Capital International Airport
While the Beijing airport was poised to close the gap on Atlanta Airport by 2015, it no longer benefits from the double-digit growth it enjoyed in previous years and as such remains in the second position. The combination of a Chinese slowdown and capacity constraints has meant lower growth levels at the airport. Beijing Capital International Airport grew by 4.4% in total passenger traffic.

Dubai International Airport
Moving from the sixth busiest airport in 2014 to the third position in 2015 is Dubai. Total passenger traffic at the airport grew by 10.7% in 2015. It is also the world’s busiest in terms of international passengers ahead of London’s Heathrow. Dubai has become the fulcrum that connects long-haul international flights from east and west, north and south.

Chicago O’Hare International Airport
Chicago O’Hare moved up to become the fourth-ranked airport in 2015 from the seventh position in 2014, with 9.8% growth last year. After years of congestion, the airport is reaping the benefits of runway expansions and other capacity developments.

Tokyo Haneda Airport
Tokyo International Airport, commonly known as Haneda Airport or Tokyo Haneda Airport, is one of the two primary airports that serve the Greater Tokyo Area, and is the primary base of Japan’s two major domestic airlines, Japan Airlines and All Nippon Airways, as well as Air Do, Skymark Airlines, Solaseed Air and StarFlyer. More than 75 million passengers passed through Tokyo Haneda in 2015, a rise of 3.4% over 2014.

Los Angeles International Airport
LAX processed more than 74.93 million passengers in 2015—a rise of 6.1%. Despite the increase, it fell two spots in the rankings, from fifth to seventh. The airport holds the claim for ‘the world’s busiest origin and destination airport’, and has for many years. The airport was the third busiest in the world by aircraft movements. Furthermore, it is also the only airport to rank among the top five US airports for both passenger and cargo traffic.