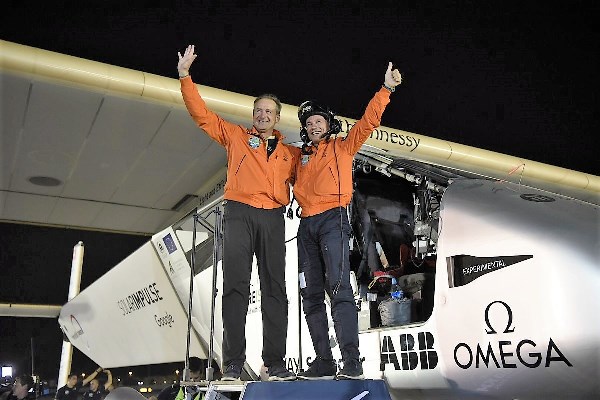 
QUOTES/BLURBS:
Solar Impulse was not built to carry, but to convey messages. We do not plan to revolutionize the aviation industry but instead to demonstrate that the actual alternative energy sources and new technologies can achieve what some consider impossible. – Bertrand Piccard

Between the vision and its implementation, there are numerous challenges to be met. To fly with solar energy only, we needed to find a way to build an aircraft that is super robust and superlight at the same time, and above all extremely energy efficient, so as to need only minuscule amounts of energy in order to fly. – André Borschberg

After setting at least eight world records, Solar Impulse 2 (Si2), the earth’s first solar plane, successfully flew around the world for months without a drop of fuel, returning to its host city of Abu Dhabi in July.
From Egypt, Swiss explorer and pilot Bertrand Piccard navigated Si2 on July 23, the last leg of its historic round-the-world trip using nothing but the power of the sun, before arriving at the Al Bateen Airport in the UAE capital.
“To fly over the country of the great Pyramids reminds me that there was a time when the sun was worshiped as a God,” said Piccard, a psychiatrist, who also holds numerous world records in flying a balloon around-the-world within days, among other achievements.
The Abu Dhabi Future Energy Company or Masdar-sponsored Solar Impulse first began its round-the-world journey in March 2015, when it took off from Abu Dhabi, and Piccard dedicated his first flight to His Highness Sheikh Mohamed bin Zayed Al Nahyan, Crown Prince of Abu Dhabi and Deputy Supreme Commander of the UAE Armed Forces, who he met 12 years ago.
Piccard said the UAE has been a stalwart support for his adventure.
“Today, we are living the final moments of a once in a lifetime adventure contributing to setting a new milestone in aviation, one centered not on speed or height, but instead on exploring new clean and efficient technologies that can almost make it possible for the plane to fly with unlimited endurance, a week, a month, something that was never done,” said Andre Borschberg, the project’s co-founder and co-pilot.
While flying back to Abu Dhabi, Piccard briefly spoke with United Nations Secretary General Ban Ki-moon, who on July 23 also signed the climate change agreement with 175 countries.
“I am inspired by your pioneering spirit,” Ban Ki-moon told Piccard. “Thank you for your leadership and inspiration.”
Family of Explorers and Inventors
Born into a family of explorers and scientists, it’s in Piccard’s pedigree to curve an unconventional path.
His grandfather, physicist Auguste Piccard, was the first man to witness the curvature of the earth, paving the way for modern aviation.
His father, Jacques Piccard, made history when he explored the deepest part of the earth, the Marianas Trench, in the US Commonwealth of the Northern Mariana Islands, with the Bathyscaphe he had built with the elder Piccard.
That was in 1960. Jacques Piccard set a record that still stands nearly 50 years later, together with Don Walsh of the US Navy, when they went down to a depth of 10,916 meters in the Marianas Trench in the Pacific.
Growing up, Piccard said he was greatly influenced by people who love exploring, discovering and going beyond the conventional.
“They all showed me how interesting life can be when we explore the world, when we explore life and the unknown, beyond the certainties and the common assumptions. Talking with them made me wish to have the same kind of life,” said Piccard summing up his formative years surrounded with the biggest brains in science and innovation.
Solar Impulse Dream
The idea to fly a plane harnessing the power of the sun came about to Piccard in 2002.
Back then, there was no team, no technology and no money.
“Nothing more than a crazy idea of achieving the first-ever solar flight around the world, with the objective of promoting clean solutions for a more sustainable world through a spectacular adventure,” Piccard recalled.
This, however, didn’t stop Piccard from pursuing his dream.
Within the succeeding years, funds from committed individuals and institutions made Solar Impulse possible through 13 years of research and development.
Sun-powered planes had flown before but Piccard’s idea of storing energy, enabling the aircraft to fly day and night, inspired the Swiss Federal Institute of Technology in Lausanne.
The institute offered to conduct a feasibility study and tasked André Borschberg, a businessman, professional pilot, and engineer, to put together the technical team that will build the prototype.
A friendship between Piccard and Borschberg began, ushering the birth of Solar Impulse.
World Record
After successfully convincing private sponsors to finance the multimillion project, Piccard and Borschberg began alternately flying Solar Impulse, stopping off at 16 cities to raise awareness on the viability of renewable energy.
Borschberg began the first flight out of Abu Dhabi to the nearby Muscat, Oman for 13 hours.
Piccard then flew the Swiss-experimental solar powered aircraft to Ahmedabad, India for more than 15 hours.
It flew to two more cities in India before flying to Myanmar, then to China. It then crossed to Nagoya, Japan, en route to the longer route going to Hawaii.
The flights across the Pacific and Atlantic Oceans each took 5 days to complete, pushing each pilot to their physical limit as they flew the Solar Impulse 2 solo.
“The question isn’t the plane,” said Borschberg in April, “It’s the question of the pilots being in the right physical and mental state to complete the flight.”
The warmer, thinner air above the Saudi desert also means Solar Impulse’s motors will have to work harder to propel the vehicle forward.
This will require careful management of the energy reserves in the plane’s lithium polymer batteries, to be sure they can sustain the aircraft through the night hours.
“We thought it was going to be an easy flight because it’s always good weather between Egypt and Abu Dhabi across Saudi. But actually, it’s extremely difficult to find a good strategy,” Piccard told reporters before the flight.
By the time, it reached Hawaii, however, the planes photovoltaic batteries were damaged caused by being packed in too much insulation. New parts had to be ordered, causing it to be grounded at the Kalaeloa Airport in Oahu.
Test flights began in February 2016 and by April, Solar Impulse resumed its global quest to circumnavigate the world with no fuel.
And the rest is history.