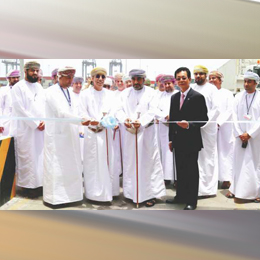 With global investments of more than $25 billion, SOHAR Port and Freezone is one of the fastest growing ports and freezone developments in the world.
Located midway between Dubai and Muscat, this deep-sea port which lies at the center of global trade routes across Europe and Asia, is home to logistics, petrochemicals, metal and food clusters that feed downstream industries with iron and steel, plastics and rubber, ceramics and chemicals.
NAFL Review gets first-hand insights about the latest in this thriving business venture between the Sultanate of Oman and the Port of Rotterdam with Mark Geilenkirchen, SOHAR Port and Freezone CEO.
SOHAR Port showed impressive growth in 2016, how does 2017 look?
MG: “Our first quarter performance was excellent and shows once again that SOHAR is in the right place at the right time. For example, in the first quarter of 2017 compared to the first quarter of 2016, our dry bulk throughput was up by well over 40%. We have seen sustained double-digit growth in SOHAR for over twelve years now, and we’re 100% on track for continued expansion.”

What is really driving growth at SOHAR Port?
MG: “SOHAR Port South is our new land reclamation project and will allow us to add more businesses to drive continued growth. Orpic has nearly completed their refinery expansion project, increasing capacity to 198,000 barrels a day; and they’ve just started to build a US$6 billion polyethylene & polypropylene plant, which will put SOHAR on the map as a prime location for downstream plastics industries.”
Which sectors are the Port focusing on?
MG: “SOHAR will be focusing on two main areas moving forward: food and logistics. The Port was originally based around three industrial clusters: logistics, metals and petrochemicals. We recently added food as our fourth pillar with the launch of SOHAR Food Zone, the region’s first dedicated agro terminal.” What sets SOHAR apart from other ports?
MG: “We have what is probably the best location of any port in the Middle East. We are outside the Strait of Hormuz, which has well over 50,000 vessels a year passing through narrow and congested shipping lanes. That saves time and additional insurance premiums. With a draft of up to 25 metres alongside, we are the deepest port in the Gulf and South Asia, and the region’s largest bulk Port. On the landside, the government has been investing heavily into new and uncongested highways that connect us to Saudi Arabia, the UAE and the rest of the GCC.”

Is SOHAR ready for the new mega-containerships?
MG: “Hutchison Ports SOHAR has recently completed work on Terminal C and is moving into a new era of automation, as container throughput has more than doubled in the past eighteen months. The new facility allows the remote operation of recently installed quayside cranes with the reach to load and unload 20,000 TEU ships.”

How important is the freezone in SOHAR?
MG: “In 2010, we added our Freezone next to the Port, with a total area of 45 square kilometres, and it acts as a magnet to attract international investors. The first five square kilometres of the Freezone are already leased out and many of the companies are now fully operational. We are aiming to fill the next square kilometre before the end of 2017.”

How does SOHAR see its involvement in China’s One Belt One Road?
MG: “We recently signed our first sister-port agreement with Shenzhen Port, China’s third largest, committing to closer collaboration on many fronts. SOHAR sits ideally connected at the crossroads of east and west  as one of the best placed strategic hubs for the Middle East, and for onward shipments around the Cape or via Suez Canal to Europe. You can already see us as a prime regional hub on all the official Chinese OBOR maps.”