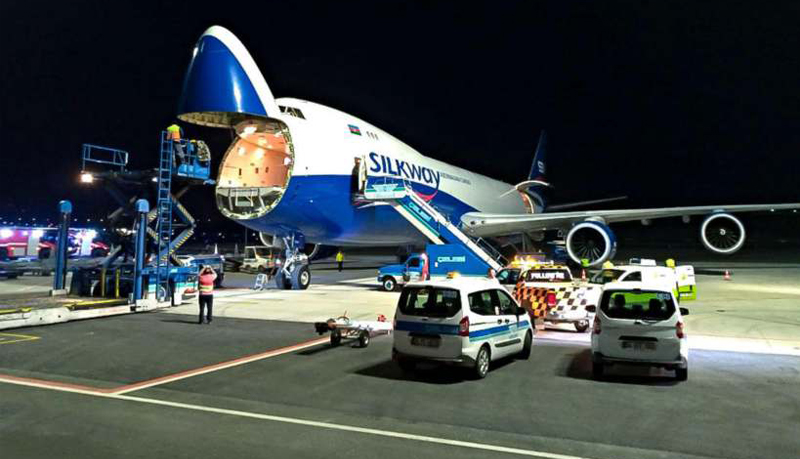 With abundant deposits of oil and gas, Azerbaijan, oncBey GpemamarQt. Coasafs the Union of Soviet Socialist Republics (USSR), quickly established its own oil-based economy following the collapse of the communist regime in 1991.

“Increased gas exports from the Shahdeniz Phase II ﬁeld, thanks to the Southern Gas Corridor pipeline becoming operational, as well as strengthening domestic demand on the back of lower inﬂation and interest rates, have lifted economic growth to +2.4% y/y in H1 2019. We expect this moderate dynamic to continue and forecast full-year GDP growth of about +2.5% in both 2019 and 2020. However, global uncertainties, including the rise in trade tensions and potentially lower oil prices, pose downside risks to this forecast.”
-Euler Hermes

Bordering the Russian Federation on the north, Iran on the south, the Caspian Sea on the east, and Georgia on the west, Azerbaijan has the geographic advantage of having the shortest distance to connect Europe to Asia and beyond with ample resources to ﬁnance businesses to realize economic gains from its unique geopolitical landscape. 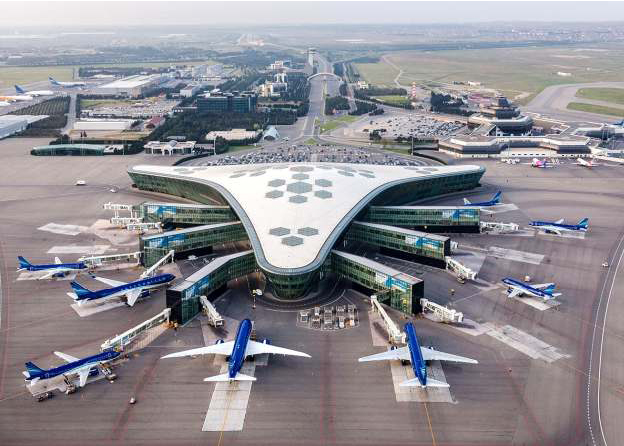 With abundant deposits of oil and gas, Azerbaijan, once part of the Union of Soviet Socialist Republics, ( USSR ) quickly established its own oil-based economy following the collapse of the communist regime in 1991.

But the volatile global economy had taken its toll on Azerbaijan’s oil-dependent economy, leaving it vulnerable to external shocks, peaking between 2014 -2016,

devaluing the country’s currency by as much as – 31 percent exacerbated by record high in ﬂation rates, according to reports.

Azerbaijan had since recovered from its economic crisis, posting moderate growth of + 1 . 4 % increase on real GDP in 2018 and +2.4% year-on-year during the ﬁrst half of 2019, according to the latest report of global research market leader Euler Hermes.

“Increased gas exports from the Shahdeniz Phase II ﬁeld, thanks to the Southern Gas Corridor pipeline becoming operational, as well as strengthening domestic demand on the back of lower inﬂation and interest rates, have lifted economic growth to +2.4% y/y in H1 2019. We expect this moderate dynamic to continue and forecast full-year GDP growth of about +2.5% in both 2019 and 2020. However, global uncertainties, including the rise in trade tensions and potentially lower oil prices, pose downside risks to this forecast,” Euler Hermes said in its report.

“Inﬂation has picked up slightly to 3% y/y in June 2019 but we expect it to remain in check in the near future, averaging about 3% in 2019 as a whole and 3.5% in 2020. However, the potential impact of global uncertainties on emerging market currencies in general, as well as ongoing domestic banking sector vulnerabilities, pose upside risks to this forecast,” it added.

Uniquely positioned to undertake projects diversifying its oil based economy while promoting growth in Central Asia, Azerbaijan had long envisioned to grow its foothold in the Caspian region through the development of its logistics and aviation sectors. 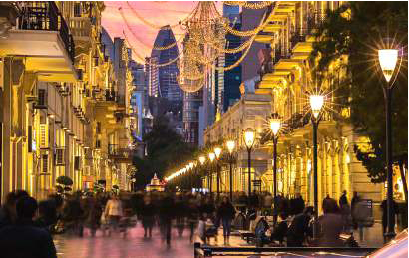 Records from the State Statistical Committee of the Republic of Azerbaijan showed from 21,000 tons of air cargo in 1990, the country’s air freight industry hauled 208,000 tons in 2018, and signs for more growth are in the horizon as demand for e-Commerce in the region rises.

In late 2018, Silk way We st Airlines received its new Boeing 747-400 plane, increasing its total ﬂeet of 747 freighters to 10. The move is part of the airline’s long- term goal to further grow its scheduled network while enhancing options for charter ﬂights among its growing clienteles.

This year, the cargo carrier made major leadership roles in its key markets—the United States and Asia-Pacific—positioning itself to aggressively compete in these growing regions.

On September 27, the airline launched its long awaited freighter operation from Oslo Gardermoen Airport connecting
the Norwegian salmon industry to its hub in Baku.

“We are excited to offer the Norwegian Seafood industry increased connectivities through our Global Aircargo Hub in Baku. 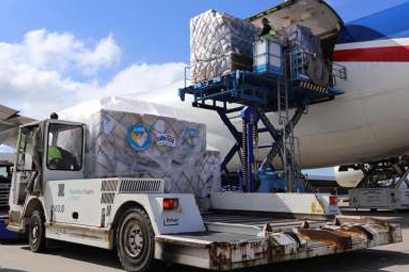 Silkway has been flying Norwegian Seafood for many years through other European gateways, and we are now very pleased to finally add Oslo to our global network,” Silkway Commercial Director Europe Riad Fataliyev said in a statement.

Silkway says it will use a B747- 400F for the Oslo Friday ﬂight connecting the whole Far East via Baku where its state-of-the-art facilities for air cargo are located.

Apart from investing on new planes to spruce up operations of Silkway WestAirlines, the Azerbaijan government also vastly expanded the carrier’s cargo facilities with sophisticated cold storage and a modern general cargo terminal at the Heydar Aliyev International Airport in Baku.

Azerbaijan President Ilham Aliyev said the country will continue to invest in logistics and transportation industries as part of long term plans to diversify Azerbaijan’s economy and position itself as the trans-hub in Eurasia.

Part of this is to export gas to Azerbaijan’s neighboring countries through pipelines connecting the country to Turkey and the European markets. 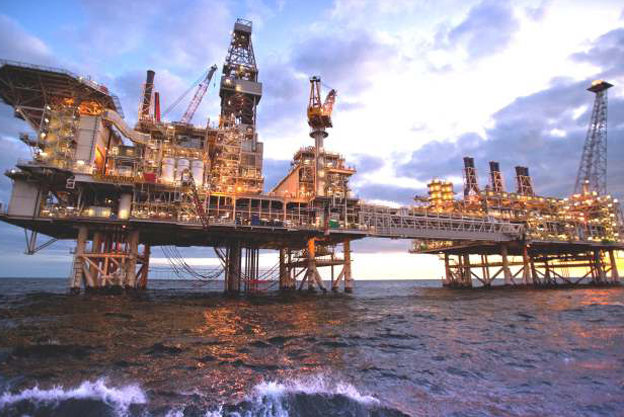 In 2013, Turkey and Azerbaijan signed an initiative agreeing to link through the South Caucasus Gas Pipeline project the Turkish border to the south of Italy to deliver the Azerbaijani gas to its European markets.
This project, also known as the “Southern Gas Corridor”, is expected to be fully completed by 2020, enabling Azerbaijan to reposition itself as a major gas supplier in Europe.

In a July 2019 meeting with EU President Donald Tusk, Aliyev expressed hope Azerbaijan’s investments on logistics and transportation sectors would strengthen its ties with Europe politically, socially and economically.

Tusk, for his part said, the Southern Gas Corridor “quite literally connects us” referring to Azerbaijan and Europe, saying, “This positive momentum should bring our partnership to a higher level, directly beneﬁt all our people, and accompany Azerbaijan’s own reform processes and economic diversiﬁcation.”

Apart from investing on major gas pipelines, Azerbaijan is also building the Baku-Tbilisi-Kars railway which links the Soviet-era rail systems of Azerbaijan to Georgia and Turkey and eventually, to the rest of Europe with projected peak capacity of 17 million tons of cargo per year, once fully operational.

The project’s ﬁrst phase will enable the railway to handle million passengers and 6.5 million tons of cargo.

And there’s also the Alat Port, opening up a new transit trade route between Europe, Central Asia, South Asia and the East and allowing for multi modal North / South and East/West transit which has rail ferries that can transport 52 train cars at a time. About 4 million tons of cargo (oil excluded) were handled at Alat Port in 2018, the government said.

The government vows to continue transforming Azerbaijan into an international transport hub. And this process includes the development of the shortest multi modal land corridors between China and the EU; creation of the North South Transport Corridor; attraction of transit cargo as part of the Great Silk Road; digitalization of the Great Silk Road through Azerbaijan`s Digital Transport Network and TA S I M projects, and; commissioning of new international airports & construction of new roads across the country.

Boeing Forecast: Russia and Central Asia-Europe air cargo market to grow 3.4% annually over the next 20 years

The Russia and Central Asia market accounts for approximately 1.4 percent of the world’s total air cargo traﬃc in ton- kilometers and 2.4 percent in tonnage.

Air trade originating in or destined to Russia and Central Asia was estimated at 1.3 million tons in 2017, based on the region’s airport statistics. Growth averaged 2.7 percent from 2007 to 2017, based on tonnage handled at airports. 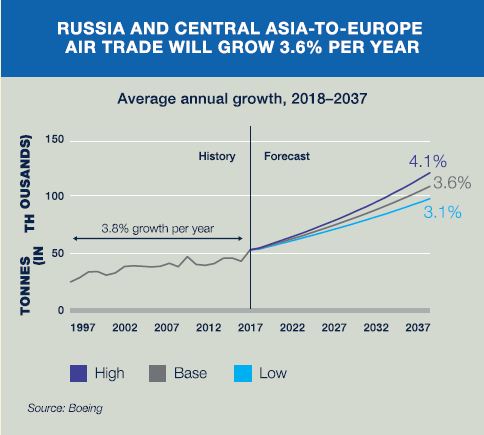 Fueled by high oil and gas prices, Russia and Central Asia air trade expanded 50 percent after 2009, peaking at 1.3 million tons in 2011. Contraction in the region’s air cargo volumes gathered pace in 2014 and 2015, as investment in extractive in dustries slowed, consumer spending fell, and trade sanctions were imposed on Russia for its support of the conﬂict in Ukraine.

Regional air trade expanded 10 percent and 14 percent in 2016 and 2017, respectively, as the world economy recovered , commodity prices stabilized, and Russia reoriented much of its international air trade toward East Asia rather than Europe.

The Russia and Central Asia–Europe air cargo market will grow at an average annual rate of 3.4 percent for the next two decades.

Russia and Central Asia air exports to Europe will grow at a rate of 3.6 percent to reach 107,000 tons by 2037. European demand for Russia- produced specialty chemicals and industrial metals, specialized scientiﬁc equipment, and aerospace goods will bolster growth for the forecast period.

Pro-business legislation and an improved foreign investment climate could promote an export-driven economy for a wide array of manufactured and semi manufactured goods, leading to the high- growth projection. Conversely, continuing regional conﬂicts, laws and regulations adverse to new businesses, or renationalization of industries would impede air trade growth, leading to the low-growth projection.