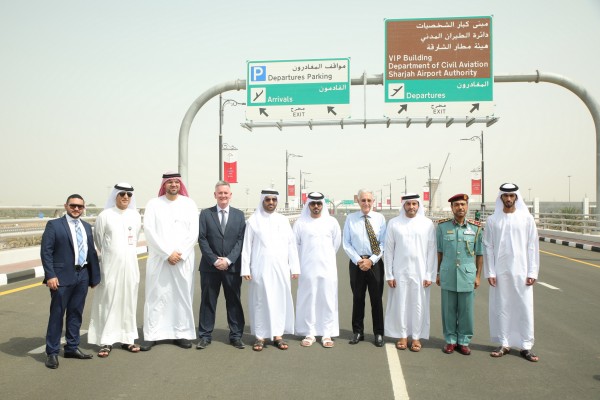 The ceremony for the AED85 million road project took place in the presence of Ali Bin Shaheen Al Suwaidi, Chairman of the Directorate of Public Works (DPW) and Ali Salim Al Midfa, Chairman of the Sharjah Airport Authority (SAA). Sheikh Khalid Bin Issam Al Qasimi, Chairman of the Department of Civil Aviation in Sharjah, and Sheikh Faisal bin Sauod Al Qasimi, Director of the SAA, were also in attendance, the UAE government said in a statement.

Commenting on the opening of the bridge, Ali Al Midfa, said, “The project of developing the new entrance to Sharjah Airport comes within the framework of the comprehensive plan developed by the SAA, under the directives of H.H. Dr. Sheikh Sultan bin Mohammed Al Qasimi, Supreme Council Member and Ruler of Sharjah, and the close attention of H.H. Sheikh Sultan bin Mohammed bin Sultan Al Qasimi, Crown Prince and Deputy Ruler of Sharjah and Chairman of the Executive Council, in order to accommodate the expected growth in the number of passengers traveling through the airport in the coming years.

“The comprehensive plan includes the construction of the bridge and the development of an alternative road, which is approximately 2.1-km long, along two tracks that will run into four routes, which will contribute to the upgrading of roads leading to the airport and includes construction of more than 1,000 additional parking spaces, in addition to a rainwater drainage network in the parking area and the area near the airport.

“The project will reduce pressure on the current bridge utilised by airport users and residents in surrounding areas, and ease the entry and exit of passengers and road users by separating the movement of travellers from the surrounding residential areas, as well as reducing congestion due to the large number of vehicles in the area during the morning and afternoon peak hours.”

Hind Al-Hashimi, Director of the General Services Department at the DPW added, “We are committed to developing a sustainable and modern system for all the projects implemented by the directorate, which is in line with the emirate’s trends in supporting sustainable development and its strategy to preserve the environment and natural resources using the best and latest international technical specifications.”