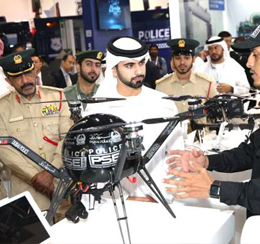 SECURITY, SAFETY & FIRE PROTECTION industry in the Middle East projected to grow to $26.3

DUBAI: Saudi Arabia and the United Arab Emirates will lead the growth in the Middle East market for security, safety and fire protection over the next four years as regional governments and the private sector push for improved technologies to better protect assets, people, businesses and borders.

The research and analyst firm Frost & Sullivan said the Middle East commercial security, homeland security, and fire safety market was worth a combined US$12.9 billion in 2016, and is estimated to grow 15 percent annually, reaching US$26.3 billion by 2021.

The firm also stressed at the opening of Intersec 2017 on January 22 which was flagged off by His Highness Sheikh Mansoor bin Mohammed bin Rashid Al Maktoum, who was accompanied by senior government officials, organisers, and high-ranking representatives from the regional security industry, that regional countries are making rapid strides to upgrade infrastructure and secure their countries.

According to F&S, the Middle East commercial security market, which includes intruder alarms, CCTV surveillance, electronic locks, perimeter protection, door alarms, access control and identification systems, is expected to be worth US$10.2 billion by 2020, growing annually by 24 percent from its US$3.8 billion value in 2015.

Similarly, the region’s homeland security market is forecast to grow annually by 21 per cent up to 2020, with market revenues increasing to US$34.2 billion, driven predo-minantly by investments in critical infrastructure, major events, and the need to counter perceived threats.

F&S also pointed out the Middle East Building Automation market is anticipated to grow 7.32 percent annually with a revenue projection of US$ 560.5 million by 2020. Saudi Arabia and the UAE, with their large projects on housing and commercial construction, will drive demand for smarter and control-enabled buildings.

Fire protection also has huge growth potential, with the Middle East’s fire safety market estimated to grow annually by 12.5 percent from 2012 to 2020. During this period, the market will grow from US$1.6 billion to US$4.2 billion, making it one of the world’s largest fire safety markets.

Consultancy firm 6Wresearch separately said the GCC’s fire safety systems market was worth US$1.36 billion in 2015, with Saudi Arabia (US$598.4 million), and the UAE (US$394.4 million) comprising 73 percent of the regional market.

The other Gulf States of Bahrain, Qatar, Oman, and Kuwait accounted for US$367.2 million (27 percent).

6Wresearch said Saudi’s fire safety systems and equipment market is projected to grow six percent annually from 2016 – 2020. By 2022, the market is estimated to be worth US$632.2 million, attributed to a recovery in the construction and real estate verticals.

Other factors driving regional demand for new fire safety systems include government and transportation sectors, residential, retail, and hospitality verticals, while Saudi’s Vision 2030 and the upcoming Dubai Expo 2020 in the UAE is also likely to boost further growth.
At Intersec, the world’s leading exhibition for security, safety, and fire protection, authorities unveiled the new UAE Fire and Life Safety Code.

“Ongoing investments in the commercial, retail, industrial, hospitality, and the healthcare sectors, combined with upcoming high profile international events, means growth is the buzz word across all sectors in the GCC, and this also applies to the fire safety market,” said Ahmed Pauwels, CEO of Messe Frankfurt Middle East, the organiser of Intersec, and Intersec Saudi Arabia.

“Improvements in the enforcement of fire codes in the construction sector and the constant need for fire protection and life safety means the GCC’s fire safety market is estimated to grow annually by 14-16 percent to reach US$3.15 billion by 2020.

“This robust demand for the latest equipment, fire protection and firefighting systems is reflected in the strong growth in the Fire & Rescue section at Intersec, while Intersec Saudi Arabia too will host the biggest names in the fire protection market,” added Pauwels.
Oil & Gas is another key sector for the fire protection industry, and will be a key target area for some companies.

In its 19th edition, Intersec 2017 featured more than 1,300 exhibitors from 58 countries spanning over 55,000 sqm of exhibition space, registering a 10 percent growth over the previous year.