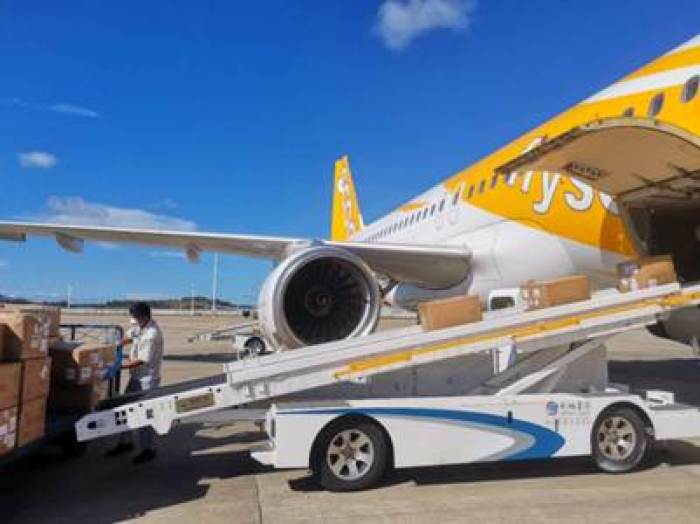 With stringent border control measures in place due to COVID-19 causing a reduction in passenger flights, there has been a severe decline in the volume of belly hold space available for cargo. To make up the shortfall and maintain global supply chains during the pandemic, Scoot has operated hundreds of cargo flights using passenger aircraft, including many where the cargo was placed on passenger seats.

Now, to better serve cities with smaller airports, Scoot has modified one of its A320ceo aircraft (9V-TAZ) to carry cargo in the cabin by removing all seats, doubling its cargo-carrying capacity to nearly 20 tons.

The four-day modification of the aircraft included the removal of passenger seats, installation of placards to demarcate areas where cargo can be placed, and the uplift of additional fire extinguishers. For flights operated with this aircraft, there will be a minimum of two pilots and two cabin crew onboard to ensure safety and smooth operations, as well as manage any inflight emergencies. All pilots and cabin crew are trained regularly to identify hazards and handle various emergencies, including situations involving smoke, fumes or fire.

The first cargo charter flight by the modified 9V-TAZ took off on August 22 2020 from Fuzhou to Singapore, making Scoot one of the first airlines in Southeast Asia to operate cargo charters with such modified aircraft. The aircraft transported a total of 13 tonnes of cargo in both the bellyhold and cabin, comprising mainly goods for daily use, and has four more flights scheduled for the rest of August. Another A320ceo aircraft is scheduled to undergo similar modification works this week.

In March, Scoot was one of the first airlines in the region to start operating belly-hold cargo charters using its B787-9 widebody passenger aircraft. It has since been seeking opportunities to continually grow and diversify its freight capabilities to offer more options to cargo agents, freight forwarders, and other industry stakeholders. In May 2020, after obtaining the necessary approvals, Scoot had also started operating cargo charters using its A320 narrowbody aircraft, as well as began loading cargo in the cabin, secured on passenger seats.

Campbell Wilson, Scoot’s CEO, said: “With many passenger aircraft sitting idle due to the pandemic, Scoot started operating cargo charters to carry essential supplies as an alternative revenue stream. Since then, we have been growing our cargo capacity and capabilities to remain competitive while providing more value for our customers. The modification works carried out on 9V-TAZ are our biggest undertaking to date, and we thank the Civil Aviation Authority of Singapore (CAAS) for their support in this endeavor with their certification of the modification works.”

Kevin Shum, director-general of CAAS, said: “Scoot has responded nimbly to the market conditions during these challenging times to meet the demand for airfreight. CAAS is happy to support their efforts in modifying their passenger aircraft to carry cargo in the cabin. The modified aircraft would enable Scoot to mount freight services between Singapore and key trading markets.”