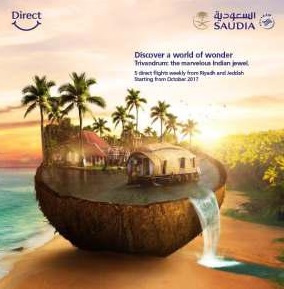 The Kingdom of Saudi Arabia now flies five times a week to Kerala capital—three from Riyadh and two from Jeddah, satisfying both religious and business segments as well as

facilitating holidaymakers to the state.

The maiden flight SV 756 touched down in Trivandrum at 12:15 hrs local time on October 1 and received a ceremonial traditional water salute.

His Excellency Dr. Saud Mohammed Al-Sati, the Kingdom of Saudi Arabia’s Ambassador to the Republic of India; the Governor of Kerala State; and airport authorities expressed theirdelight in the start of the new operation, a further reinforcement of the existing close ties and excellent relations between the two countries.

Director General of Saudi Arabian Airlines, His Excellency Eng. Saleh bin Nasser Al Jasser commented how the new route will enable further development of the well- established economic ties: “The airline continues to expand its network to include routes which provide economic growth opportunities benefitting both nations. With the addition of Trivandrum, SAUDIA now counts eight destinations in India among its network of international business cities.”

SAUDIA was named the 2017 ‘World’s Most Improved Airline of the Year’ by Skytrax at the World Airline Awards at the Paris Air Show this past June.

All next – generation aircraft in SAUDIA’s fleet include its inflight entertainment and connectivity system, which includes WiFi services on board, and over 3000 hours of movies, television programs, games, music and more. All entertainment and WiFi facilities are available across every class of travel