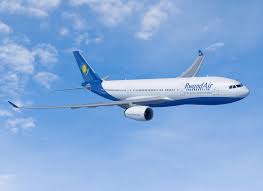 RwandAir takes delivery of its first A330 aircraft

RwandAir, the national flag carrier of the Republic of Rwanda, has taken delivery of its first of two Airbus long-haul widebody A330 aircraft. In doing so, it becomes the East African launch operator of the aircraft and Airbus’s newest customer.
The A330 is the first wide-body aircraft in RwandAir’s fleet and is configured in a comfortable three-class cabin layout with 20 seats in Business, 21 seats in Premium Economy and 203 seats in Economy.
RwandAir’s A330 is powered by Rolls-Royce Trent 772B engines and will be deployed on medium- and long-haul routes from its Kigali home base to destinations throughout Europe, Asia and the Middle-East.
The A330 Family, which spans 300 to 440 seats, has now attracted over 1,600 orders, with over 1,250 aircraft flying with more than 100 operators worldwide. The A330 family is the most widely operated widebody aircraft in the world and one of the world’s most efficient aircraft with best in class operating economics, averaging dispatch reliability well above 99%.