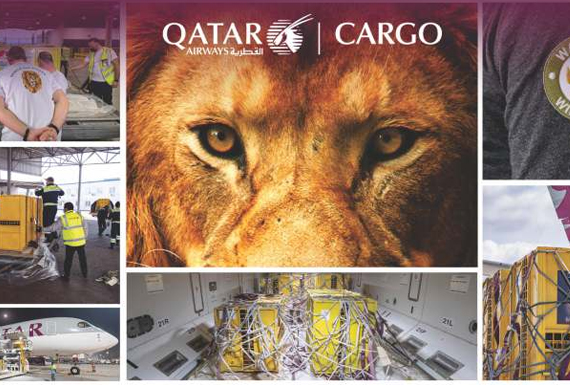 Qatar Airways Cargo creates a movement to ‘rewild’ the planet

The earth has been around for more than 4.5 billion years. Alongside its human population of over 7.9 billion are tens of billions of animals and plants that co-exist with each other for better or worse.

Scientists estimate the world to have more than 8.7 million species of animals and plants. But nearly just 2 million of them have been identified and it could take a thousand years to catalogue them all.

Yet despite this reality, about a million of these species are threatened with extinction within the next few decades mainly due to human activities.

And nowhere is this more apparent than among wild animals. We’re seeing more and more of them getting extinct – Bengal and other species of tigers, white rhinoceros, elephants, black rhinoceros, beluga whales, dolphins, etc.— with the rapid loss of their habitat across continents, poaching, climate change, among other issues.

“Wildlife extinction is a serious issue confronting us today. There’s a need for us to repopulate the world with wildlife and plants. They are vital to the health of our planet,” de Bruijn told Air Cargo Update in a video interview. “We are inviting other airlines to join Qatar Airways Cargo’s “Rewild the Planet” initiative. We need their help in saving wild animals from extinction. We are creating a movement.”

Transporting wild animals back to their natural environment for free at the request of wildlife protection bodies is a promise made by Qatar Airways Cargo as part of its “Rewild the Planet” initiative under Chapter 2 of the airline’s WeQare sustainability program, de Bruijn further explained.

In April, Qatar Airways Cargo flew for free seven lions rescued by the Ukraine-based NGO Warriors of Wildlife to nature reserves in South Africa where they are now free and well cared for.

It took the airline six months of hard work to do the job, involving more than 50 staff from different departments.

The Kouga and Swinburne nature reserves in South Africa welcomed three lions, one lioness and three cubs on April 29. This involved a three-day trip from Kiev to Doha and Johannesburg so that the lions could walk on grass for the first time in their lives. All are in good health.

Transporting wild animals requires close cooperation between the specific services involved within Qatar Airways Cargo and the NGO staff. The NGO staff looks after the animals’ well-being during the entire journey. Handlers from the Qatar Airways Cargo’s Live Animals facility are present at every stage. Naturally, the NGO was authorized to stay with the lions in special holding areas to maintain a constant link with them.

These lions have lived in captivity for years. They will never be able to adapt in the wild. They will spend the next few months in a protected area in which they will simply learn to explore nature. They will then be transferred to a much larger nature reserve where they will be protected and taken care of for the rest of their lives.

De Bruijn said Qatar Airways Cargo is deeply committed to the Rewild the Planet initiative and assured that animal rescue NGOs are welcome to seek the airline’s assistance.

Transporting rescued wild animals require specialized logistics apart from the high costs involved in caring for them while being airlifted to different sanctuaries. Thankfully, Qatar Airways Cargo’s WeQare program, takes care of these.

One of the leading global brands in air cargo, Qatar Airways Cargo is also well known for transporting live animals through its specialized QR Live product.

The airline has a state-of-the-art live animal facility at its hub at Hamad International Airport in Qatar’s capital Doha to adequately care for every species of live animals it transports.

“We have 4,200 square meters of air-conditioned live animal facility in Doha. We also have a dedicated team of animal specialists who are on call 24/7,” said de Bruijn. “We have dedicated holding areas for different types of animals. We have stalls for horses and kennels for pets.”

Indeed, Qatar Airways Cargo has built a sturdy system and infrastructure to protect every species in its care whether on land or on air.