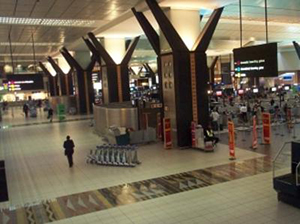 O R Tambo International Airport has become the first African airport to implement the Smart Security checkpoint that will digitise the security check process, speed up passenger progress through security and further enhance security through use of state-of-the-art scanners.

The pilot implementation of the Smart Security system recently went live at the international departures security point at the airport.

Departing international passengers will use the new system that includes a new conveyor system for checking hand luggage and new scanning booth for individual passengers.

Pityi says the first change that the passengers will notice is a security turnstile before entering the security area, where boarding passes will be verified electronically before passengers are allowed to proceed to the scanning area. There will also be less frequent requirements for laptops to be removed from bags and switched on.
The pilot of the Smart Security checkpoint will run until the end of January 2017, when its effectiveness will be assessed and possible improvements identified. Airports Company South Africa believes that over time it should be feasible to introduce the system across the airports it operates.

The Smart Security programme is part of Airports Company South Africa’s 2025 vision to be the most sought-after partner in the world for the provision of sustainable airport management solutions.

A key element of this goal is to implement digitised services at airports that extend well beyond the current self-service check-in, self-bag drop and self-boarding systems.

“The Smart Security programme is going to enhance the airport’s global security ranking and enhance our ability to counter emerging threats at airports while increasing operational efficiency and improving passenger experience,” says Pityi.

“This programme will play a pivotal role in ensuring that Airports Company South Africa moves from being an airport business that runs technology to being a digital business that runs airports. As a business we believe digitisation enhances our ability to deliver great customer experiences and our ability to grow and innovate,” says Tebogo Mekgoe, Chief Operating Officer for Airports Company South Africa.