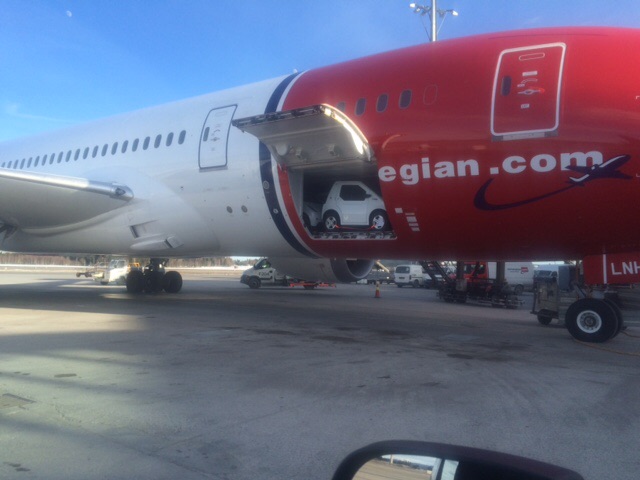 Norwegian Cargo has successfully shipped 10 electric Buddy cars and six Buddy bikes from Oslo to Toronto which will be featured in an upcoming Hollywood blockbuster movie.

The low-cost airline’s cargo division transported the Norwegian brand of electric cars in the belly hold of its Boeing 787-8 Dreamliner from Oslo to New York where the cars were then trucked to Toronto for filming. Six electric bicycles were also shipped, combining the carrier’s widebody capacity and extensive long-haul network with its North American road feeder network.

The shipment of Norwegian electric vehicles will feature in an upcoming Hollywood movie by Paramount Pictures called Downsizing starring Matt Damon. The film is directed by Alexander Payne and is due to be released in late 2017.

Bjørn Erik Barman-Jenssen, Head of Norwegian Cargo, said, “As the most environmentally friendly airline over the Atlantic, we’re proud to have flown the no-emission Buddy vehicles. To be entrusted with valuable shipments that will take a central role in a Hollywood movie is the testament to the Norwegian service offers. As we continue expanding our network and widebody capacity with four new 787-9 Dreamliners coming into our fleet this year, forwarders and shippers can depend on Norwegian to deliver freight efficiently with care in mind.”

Norwegian Cargo offers freight capacity to all destinations in Scandinavia and a range of European destinations in addition to Bangkok, New York, Orlando, Oakland, Los Angeles and Fort Lauderdale.

Customers can book via Norwegian’s GSA at www.norwegiancargo.com