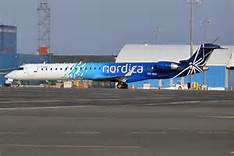 On 15 May 2017, Estonian flag carrier Nordica commenced scheduled service from Tallinn to Pulkovo St. Petersburg airport. The airline will operate up to 13 flights a week on Bombardier CRJ700 aircraft accommodating up to 88 passengers. The time of travel is 50 minutes and flights are operated in codeshare with LOT Polish Airlines.

“The launch of Nordica flights is long awaited for Pulkovo airport. Estonian capital has always been a highly demanded destination with St. Petersburg residents both as a tourist and business route, as well as a transit point for further travel to many destinations served by Nordica from Tallin, including Split, Rijeka, Trondheim, Kiev, Odessa”, said Evgeniy Ilyin, Chief Commercial Officer of Northern Capital Gateway LLC, managing company of Pulkovo airport.

“Commencing service to St.Petersburg has been in our plans from the beginning. We see a great potential for the Tallinn St. Petersburg route. The flight takes only 50 minutes ‒ today, it is the fastest way of travel between the two cities. Nordica will fly on the route all year round, and during the summer peak periods will operate of up to 3 flights a day”, said CEO of Regional Jet (Nordica) Sven Kukemelk at the lauch ceremony at Pulkovo airport.

Nordica offers a large number of direct flights from Tallinn to different European destinations. On all flights between Tallinn and St Petersburg passengers can enjoy free coffee, tea, water and newspapers, Miles&More bonus points and free luggage with all tickets.

Scheduled flights between St. Petersburg and Tallinn have not been performed since autumn of 2015. Before that the route was served by Estonian Air that ceased operations in November 2015.

Nordic Aviation Group was established with a resolution of the Estonian Government on 25 September 2015 to guarantee flight connections for Estonia. The airline commenced aviation services in November 2015. In March 2016, a new brand name Nordica with its visual identity was introduced. The company belongs 100% to the state of Estonia.