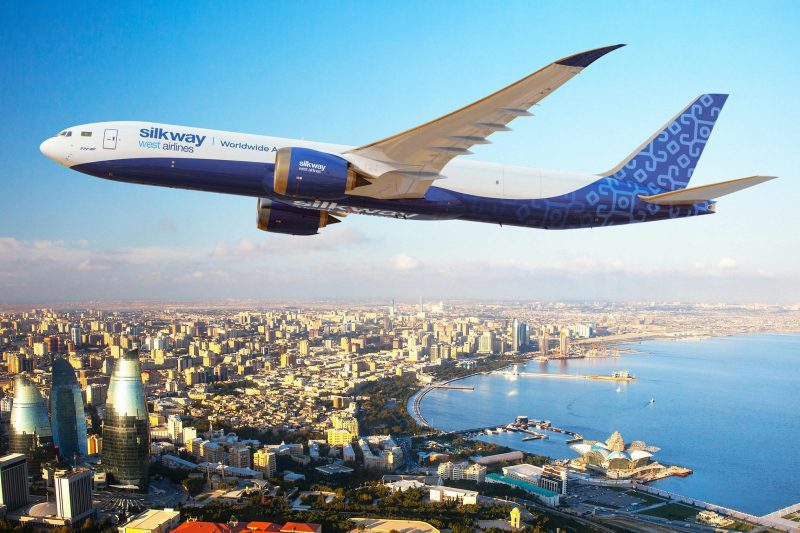 Silk Way West Airlines shows no sign of slowing down its impressive record of growth, having secured a deal to offer even more cargo capacity in the future. The Azerbaijani cargo carrier signed an order with Boeing for two state-of-the-art 777-8 freighters with options for two additional aircraft, the two companies announced today at the agreement signing ceremony in Everett, Washington. Per the agreement, aircraft deliveries are planned for 2029 and 2030.

Silk Way West Airlines is the first customer in the whole Central Asia region to order the industry’s newest, most capable and fuel-efficient twin-engine freighter. The aircraft can carry over 118 tonnes of structural payload with a range of over 9,200 km. With its advanced technology, new GE9X engines and composite wing design, the 777-8 offers 30 per cent greater fuel efficiency and emission levels as well as 25% lower operating costs per tonne. As a result, the new aircraft will also make an important contribution to the airline’s sustainability goals.

This investment will not only enable Silk Way West Airlines, which serves 40 destinations around the world, to further expand its international network and meet growing demand for cargo transport, but will also strengthen Baku as a key international cargo hub. The Azerbaijani capital has become increasingly important for the Middle Corridor linking Europe and the Western Hemisphere to Asia through the Caspian region.

Back in April 2021, the cargo airline signed a purchase agreement for five Boeing 777s, setting the course for further fleet growth. Now, the new 777-8 aircraft complement SWWA’s fleet development plans by enabling the necessary operational commonality, enhancing a long-term strategy of sustainable growth as well as allowing the Azerbaijani carrier to continuously improve service to its customers.

“We are pleased to announce this order with our longstanding partner Boeing and become one of the world’s first customers for the newest freighter,” said Zaur Akhundov, Silk Way Group president. “This year Silk Way West Airlines celebrates its 10th anniversary, and over the past decade we have been operating an all-Boeing fleet. Today’s agreement reflects our ongoing investment in Boeing’s market-leading freighters. Our fleet renewal plans will help to further reduce our operating costs and enhance fuel efficiency as well as make air freight services in our region more sustainable.”

“With sustained demand for air cargo tied to expanding e-commerce and air freight’s speed and reliability, Boeing expects the global freighter fleet to increase by 60 per cent through 2041,” said Stan Deal, president and CEO of Boeing Commercial Airplanes. “We are proud that Boeing products, including this order for the 777-8 Freighter, continue to drive Silk Way West Airlines’ expansion plans and help realize the ambition of making Baku a global cargo hub.”