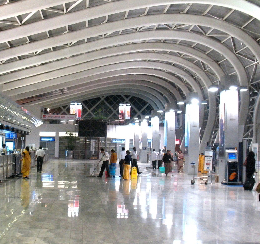 By 2025, India will rank third in the world, displacing the UK, in terms of air passenger movement, transporting nearly 1.1 billion passengers—a humongous figure.

However, when it comes to cargo, India is still way down the ranking. The Airports Council International (ACI) ranked the Indira Gandhi International Airport Limited 29th in air cargo movement, while smaller cities like Alaska are doing much better.

But realizing the cargo industry’s huge potential to drive the country’s economy, efforts are well underway from both the public and private sectors for massive investments in infrastructure, technologies, etc. The government, on its part, is working on policies to create an eco-system for overall development of the aviation sector.

Of the nearly 80 odd airports which receive commercial flights, six airports – Delhi, Mumbai, Bengaluru, Chennai, Hyderabad and Kolkata – handle over 70 percent of the cargo in India, indicating how skewed the air cargo development has been. Mumbai airport handles the maximum.
The Chatrapathi Shivaji International Airport (CSIA), run by the GVK Group’s Mumbai International Airport Limited, is India’s top ranking airport for cargo movement. The airport is chock-a-block for aircraft and already plans are afoot to get the second airport in Navi Mumbai operational by 2020. However, the progress on that project is extremely slow.

Mumbai is not taking things in stride. It will soon launch in MIAL the first-of-a-kind cargo terminal in India for bonded and heavy export cargo.

The new process management deployed, along with incremental export capacity, will reduce the dwell time to a considerable extent. While the export of light consignments will continue to be handled at the existing export terminal, commissioning this facility will enhance the terminal’s infrastructure, stimulating further growth in export volumes at MIAL.

The new facility will complement the existing Export Unitization Zone by increasing efficiency through faster admittance of cargo, swift turnaround of vehicles and overall reduction in handling dwell time with new process management. With this additional facility, CSIA will now have 50 truck docks to serve export cargo.

The dwell time at the new terminal at the country’s busiest airport will be reduced by up to 50 per cent. Being a preferred destination for air cargo exports in the western region, MIAL, with this new investment—an essential part of the airport’s Cargo Master Plan, will not only help shippers to transport cargo more efficiently from the airport but also extend the necessary infrastructural support required.

Recently, MIAL handled record breaking air freight with 47,761 tons of international freight and 20,336 tons of domestic freight in the month of October 2016. The overall cargo throughput registered a strong growth of six per cent with 68,097 tons of cargo handled in the month October 2016.

The company’s efforts to offer a world-class experience to its customers continue with the proposed Cargo Master Plan which includes state-of-the-art projects and high level automation. GVK’s approach towards modernization has always complemented its endeavour to maintain a market leading position in the Indian air cargo industry.

The figure re-establishes the airport’s strength and success in the air cargo domain.

GVK CSIA has received the Cargo Recognition Award from Swiss World Cargo for its Swiss Air Mumbai Airport station which has been rated as the best in quality and performance in the entire global network.

It also bagged the “Best Cargo Airport of the Year 2013 (Region-India)” award presented by Stat Trade Times in the Air Cargo India – 2014 convention.

On 3rd May, 2006, MIAL was appointed as an independent custodian of Mumbai. As a custodian, MIAL looks after all the air cargo terminal handling including exports and imports.

To electronically interact with its trade partners, MIAL has acquired a tailor-made Custodian management system (GALAXY). MIAL has further enhanced the capability of the IT application through introduction of Ground Handling Application (GHA) and GMAX (GVK MIAL AIR Xchange).
With the introduction of the GHA application, MIAL is now capable of exchanging all the IATA C2K messages with the airlines. GMAX is a unified electronic platform that will strengthen digital interface between the cargo terminal operator and all air cargo stakeholders including customs, customs brokers, airlines, consolidators, break-bulk agents, shippers/consignees and other statutory bodies.

With the new bonded terminal, the airport is really catering to the growing demand of the cargo community. As the demand increases for cargo movement, the airport will have to further reinvent itself, till such time the Western region thinks of airport alternatives.