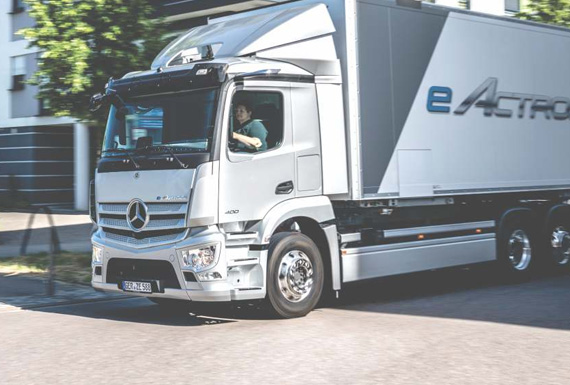 Mercedes-Benz Trucks debuts eActros: The truck for the new era

Powered by 420 kWh battery, this truck can run uninterrupted up to 400 kilometers

“We have to acknowledge that transport is a part of the problem when it comes to climate change. At the same time, we can and we will be part of the solution. We start with our eActros that has covered more than half a million kilometers on public roads. The eActros and its dedicated services are a big step for Mercedes-Benz Trucks and for our customers towards CO2-neutral transport!” – Karin Rådström, Member of the Board of Management at Daimler Truck AG and responsible for Mercedes-Benz Trucks

From its base in Stuttgart, Germany, the world-famous truck maker said at the technological heart of the eActros is the drive unit with two integrated electric motors along with a two-speed transmission.

Both motors provide for impressive ride comfort and great vehicle dynamics, while the quiet and emission-free electric drive means the truck can also be used for night deliveries and entry into inner-cities with driving bans for diesel vehicles.

Depending on the version, the eActros draws its power from three or four battery packs – each with a capacity of around 105 kWh. Thanks to a maximum capacity of 420 kWh, a range of up to 400 kilometres is realistic.

The eActros can be charged with up to 160 kW: When connected to a regular 400A DC charging station, the three battery packs need a little longer than 1 hour to charge from 20 to 80 percent.

Mercedes-Benz Trucks said it is heralding a new era with the launch of the first electric series-production truck with a star.

“We have to acknowledge that transport is a part of the problem when it comes to climate change. At the same time, we can and we will be part of the solution. We start with our eActros that has covered more than half a million kilometers on public roads,” Karin Rådström, Member of the Board of Management at Daimler Truck AG and responsible for Mercedes-Benz Trucks, pointed out.

Rådström is convinced of the concept and market potential of the eActros: “The eActros and its dedicated services are a big step for Mercedes-Benz Trucks and for our customers towards CO2-neutral transport.”

After Mercedes-Benz Trucks had presented the concept vehicle for a heavy-duty distribution haulage truck for urban areas at the IAA 2016 for Commercial Vehicles in Hanover, practical testing of 10 eActros prototypes in co-operation with customers in Germany and other European countries began in 2018.

The objective of the “eActros Innovation Fleet” was to launch a series-ready eActros on the market in 2021.

“Development of the eActros focussed on the partnership with our customers. Everything that we learned from the Innovation Fleet is now being incorporated in series production. Compared with the prototypes, several features such as range, drive power and safety have been considerably improved in the series-production model,” explains Andreas von Wallfeld, Head of Marketing, Sales and Services at Mercedes-Benz Trucks.

In order to assist haulage companies step-by-step as they switch to electromobility, Mercedes-Benz Trucks has incorporated the eActros into a comprehensive system which includes consultant and service products for customers and in turn the best possible vehicle utilisation, optimisation of total costs and the setting-up of a charging infrastructure.

Furthermore, the electric truck features a high degree of digitisation and connectivity. This also applies to vehicle safety.

In the latest generation of the Actros with a conventional diesel drive, Mercedes-Benz Trucks has already given an impressive demonstration of the standard of safety that is possible on roads today, and of what the manufacturer is doing in pursuit of its vision of accident-free driving.

With the eActros, Mercedes-Benz Trucks is not only keeping a close eye on active safety, for example in the form of systems installed as standard such as MirrorCam, Sideguard Assist S1R or the fifth generation of Active Brake Assist (ABA) with pedestrian detection, but also on challenges associated with electric vehicles and their high-voltage systems.

From autumn 2021 the series production model will be produced in Mercedes-Benz Trucks’ largest truck assembly plant in Wörth am Rhein. In recent months, intensive preparations have been made for the new production processes there. This includes the construction of a new assembly line.

In an initial phase the series-production model of the eActros will be available in Germany, Austria, Switzerland, Italy, Spain, France, the Netherlands, Belgium, Great Britain, Denmark, Norway and Sweden. Further markets will follow. 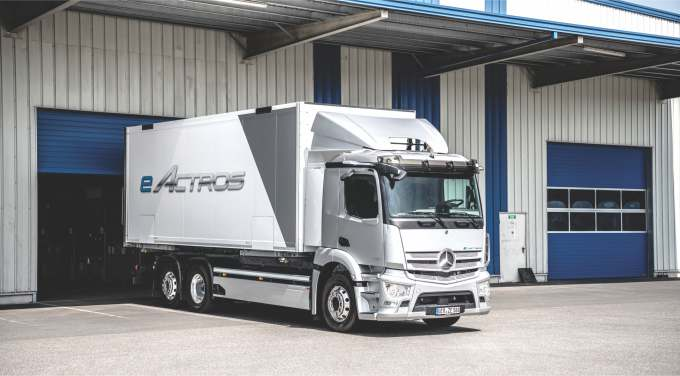 Before series production commences, the developers have subjected the eActros – like its conventional counterparts – to endurance tests to be sure of its safety, performance and durability.

The cooling system for the cargo and also the air conditioning — both of which are electrically operated — have been operating reliably in both extreme heat and winter conditions. The testing engineers have also thoroughly tested the eActros in a winter test, where special attention was paid to the behaviour of the batteries and the electrical powertrain under extreme weather conditions.

The eActros was also subjected to additional testing concepts such as noise measurements at an exterior noise test rig and electromagnetic compatibility (EMC) tests in a dedicated testing hall. The results show that the eActros is suitable for everyday use and that it fulfils operating requirements.

The Daimler Truck AG is pursuing a sustainable corporate strategy and aims to offer only new vehicles that are CO2-neutral in driving operation (“tank-to-wheel”) in Europe, Japan and North America by 2039.

As early as 2022, the Daimler Truck AG wants its vehicle portfolio to include series-produced vehicles with battery-powered drive systems in the main sales regions Europe, the United States and Japan.

Beginning in 2027, the company wants to supplement its portfolio by adding series-produced hydrogen-powered fuel cell vehicles. The ultimate goal is to achieve CO2-neutral transport on the road by 2050. (Source: www.media.daimler.com)