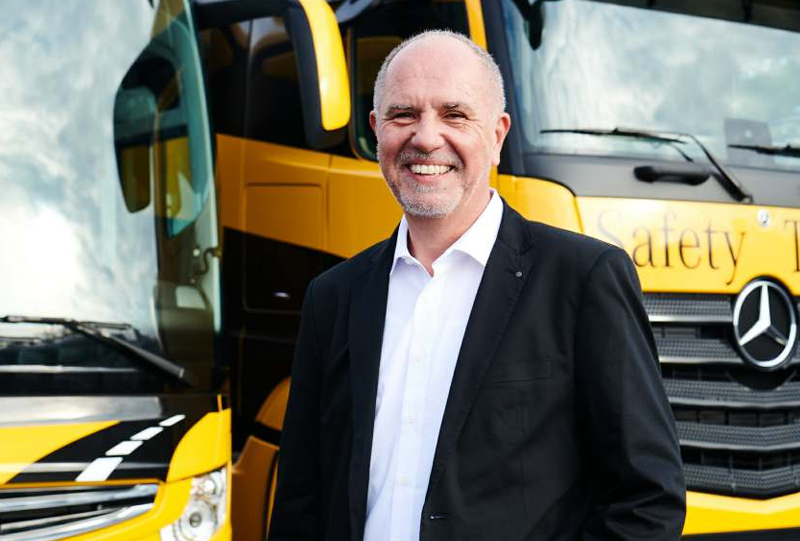 Real accidents planned to be recons-tructed on the computer as a complement to the crash test. Focus was also expanded in line with technological developments in the vehicles – to include systems for active and integral safety.

Colliding with a truck can quickly end up with serious or even fatal injuries whether the collision involves a pedestrian walking on foot, someone inside a car or a bike, because of the huge difference in mass. A collision between two trucks can also result in grave consequences for those involved.

That is why for Mercedes-Benz Trucks safety has always been a priority since 1972 when it established its commercial vehicle accident research center in Germany.

Its top priority has always been to ideally completely avoid this type of scenario or at the very least mitigate the consequences of accidents. Its safety and assistance systems are continually being developed and existing systems optimized specifically for the trucks.

The Group’s Commercial Vehicle Accident Research plays a central role in these efforts. With its accident analyses, it prepares the foundations for continually introducing further improvements to the vehicles.

“We consider our studies to be indispensable for assessing the behavior of a truck in actual accidents,” Kay Morschheuser, Head of Commercial Vehicle Accident Analyses at Mercedes-Benz Trucks, emphasized. 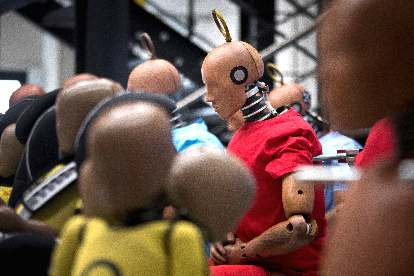 This procedure has a tradition: since 1972, the commercial vehicle accident researchers at Mercedes-Benz Trucks have been examining selected accidents with Mercedes-Benz trucks throughout Germany using all the existing and ascertainable information, and documenting data on the course of those accidents, the vehicles involved and the damage – complemented by relevant research by the police rescue teams and experts.

“We also look for conspicuous aspects pertaining to, for example, the frequency of types of accidents, the discernibility of certain patterns of events or to injuries to persons involved in accidents,” Morschheuser explains.

Whereas initially the focus was only on passive safety systems such as the cab structure, restraint systems, front and rear underride guards as well as side protection, that focus was expanded with time – in line with technological developments in the vehicles – to include systems for active and integral safety. 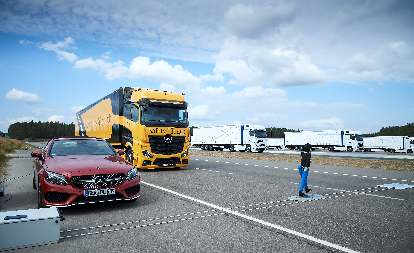 These include systems such as ABS – the Anti-lock Brake System, EBS – the Electronic Brake System and ESP – the Electronic Stability Program or Proximity Control Assist and Lane Keeping Assist as well as Active Brake Assist (ABA), Sideguard Assist or Active Drive Assist.

Based on their analyses, the accident researchers derive modification measures in close co-operation with the Development department which then often end in future Mercedes-Benz requirements. That is how, several years ago, the idea for Sideguard Assist was developed; since 2016 it has been available for many truck models ex works at Mercedes-Benz Trucks and within its system limits can contribute towards avoiding accidents with pedestrians and cyclists.

Active Drive Assist which allows partially automated driving (level 2) in a truck for the first time ever as well as the MirrorCam instead of the common main and wide-angle mirrors are further more recent examples of the interplay between Accident Research and Development at Mercedes-Benz Trucks.

The analyses of Accident Research also go hand-in-hand with the crash tests that have been systematically carried out for years. In this regard the developers and safety experts at Daimler Truck AG have regularly developed their own standards and trials always oriented towards actual accidents in addition to the tests for cab rigidity in line with the EU standard ECE R 29.

One of the most important crash tests is, for example, the impact with a platform vehicle mock-up which reproduces the typical rear-end collision between a truck and a truck driving ahead of it on the motorway.

“In future we will reconstruct real accidents on the computer as a complement to the crash test,” said Morschheuser with a look to the future. The combination of crash simulation and accident reconstruction offers an opportunity to examine accidents more specifically and in more detail with freely selected parameters and thus to better understand the mechanisms in an actual accident.

“Above all it is the circumstances which lead to an accident that are of particular interest to us,” added Morschheuser. In view of the future increase in automated driving and, consequently, the need to have the corresponding systems able to reliably handle the numerous traffic situations, this is a decisive additional benefit. 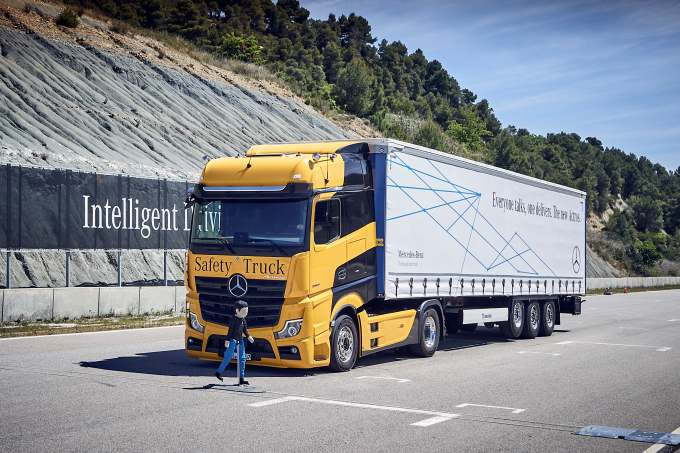 As the “icing on the cake” of a solid vehicle safety development strategy, the crash tests form a sustainable unit with accident research. This approach also follows the holistic concept of “integral safety” which Mercedes-Benz is now pursuing more than ever, whereby the passive and active systems installed in the vehicle can provide support in four phases: first during driving, second in the event of danger, third in an accident and fourth after a collision.

A glance at general accident statistics reveals just how efficiently this concept, in particular, contributes to traffic safety along with many other measures. According to the German Federal Statistical Office, the number of fatalities in accidents involving trucks in Germany dropped by around 60 percent between 1992 and 2018.

The number of those seriously injured was reduced by about 45 percent during that time. And that despite an increase in transportation of around 80 percent. Accidents with serious consequences are much rarer, although their distribution by type of accident has remained almost unchanged. Rear-end collisions, accidents at junctions and accidents caused by the vehicle leaving its lane remain focal points.

As far as the fundamental development of safety and driver assistance systems is concerned, Mercedes-Benz Trucks has been playing a pioneering role for some time. Photos & Text sourced from: www.media.daimler.com