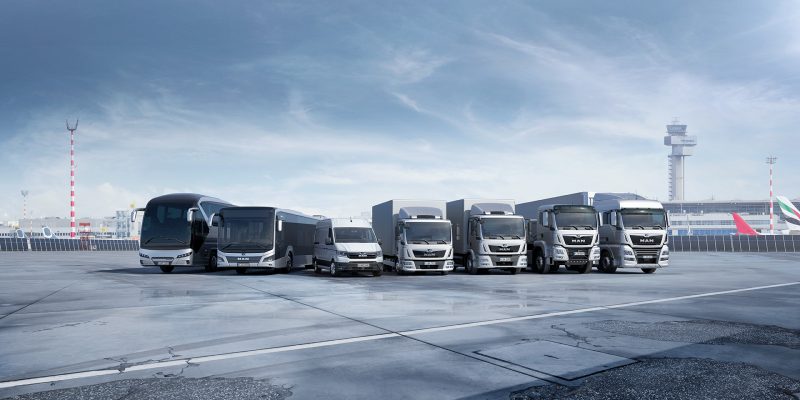 The future of urban passenger and cargo transport is electric says MAN, which is transforming from a manufacturer of commercial vehicles to a provider of intelligent and sustainable transport solutions.
The Munich-based MAN Truck & Bus is one of the leading international suppliers of commercial vehicles and transport solutions in Europe, and in today’s digital world, it uses the CAVE, short for Cave Automatic Virtual Environment, to create precise models of trucks and buses before the first physical prototype is made and the mass production starts. 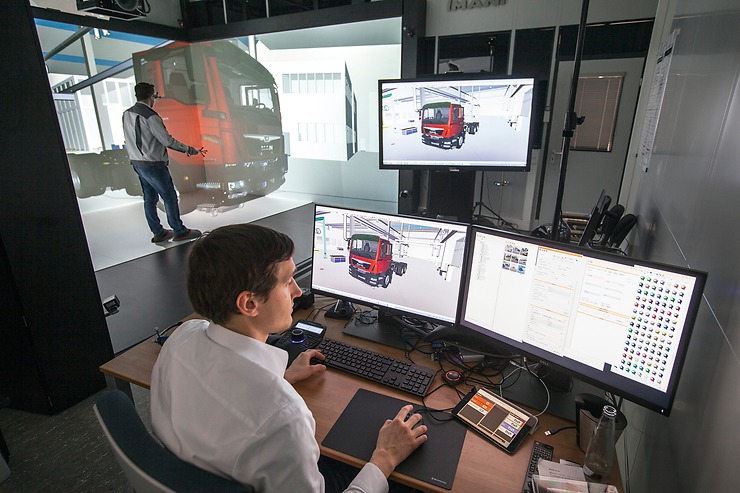 In the CAVE (Cave Automatic Virtual Environment), MAN engineers create an exact virtual mock-up of their vehicle designs. This enables many conflicts to be identified and eliminated before the first real prototype is built.
When developing new models, MAN Truck & Bus produces virtual prototypes in a three-dimensional lab so as to detect possible faults well before the start of production. It is all made possible by the “Cave Automatic Virtual Environment” (CAVE), a 46 square metre high-tech creative design facility at the MAN site in Munich.
Its five high-performance computers incorporate high-end graphics cards, infrared cameras and stereo projectors featuring 2K image resolution for four large screens.

Around a year before the start of the actual build, the CAVE enables involved persons to move around an exact virtual mock-up of the new truck or bus model using a 3D headset and controller, and thereby clear up some key questions at an early stage in the process: Are all the component units optimally accessible? Does the product or the manu-facturing process need to adapted in any way?

“The advantage of Virtual Reality is that it saves us time, material, and a lot of money,” comments MAN advance development and prototyping engineer Martin Raichl. The CAVE also enables MAN to master a challenge posed by the modular kit system and by the range of different commercial vehicle models it produces: a bracket might fit perfectly in the MAN Lion’s Coach, for example, but need adapting for installation in service bus models.

Virtuality on the march

A joint undertaking by MAN’s Production, Development and Logistics functions, the CAVE’s investment cost of around EURO 500,000 was quickly amortised, considering the deviations which the virtual prototypes identify and 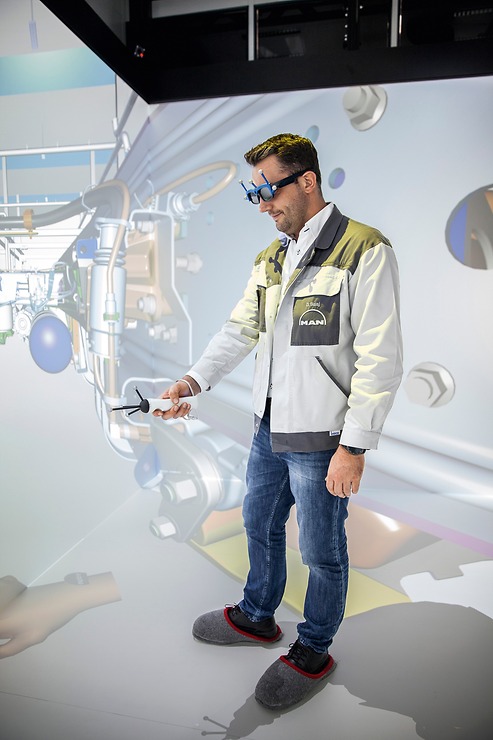 therefore prevent from being built into the real vehicles: as many as 50 percent of all potential deviations are identified in the CAVE, meaning they do not lead to costs in the subsequent production process.
And the CAVE’s success is being replicated across the commercial vehicle manufacturer’s operations: other MAN sites in Nuremberg (Germany), Steyr (Austria), Ankara (Turkey) and Starachowice (Poland) are now also employing virtual labs. Real-time connectivity among the various MAN CAVEs enables colleagues to collaborate on the same virtual models simulta-neously across national borders.

The technology itself is also being continually refined. Recently, MAN’s engineers began using head-mounted displays (Virtual Reality headsets) in the CAVE as a way to experience their vehicle designs even more accurately and realistically.

In future they are looking to introduce full-body tracking, in order to even simulate the physical stresses such as a technician might undergo when installing an exhaust silencer for example.

MAN Truck & Bus is set to showcase its advances in the fields of electromobility, digitisation and autonomous vehicles at its exhibit at the IAA Commercial Vehicles 2018 in September in Hanover, Germany, alongside its latest product highlights for trucks and coaches.

MAN will also be exhibiting the MAN eTGE, a battery electric version of the new MAN transporter, at IAA. In doing so, MAN is one of the first manufacturers to present all-electric solutions for the entire scope of city logistics applications between 3 and 26 tons. 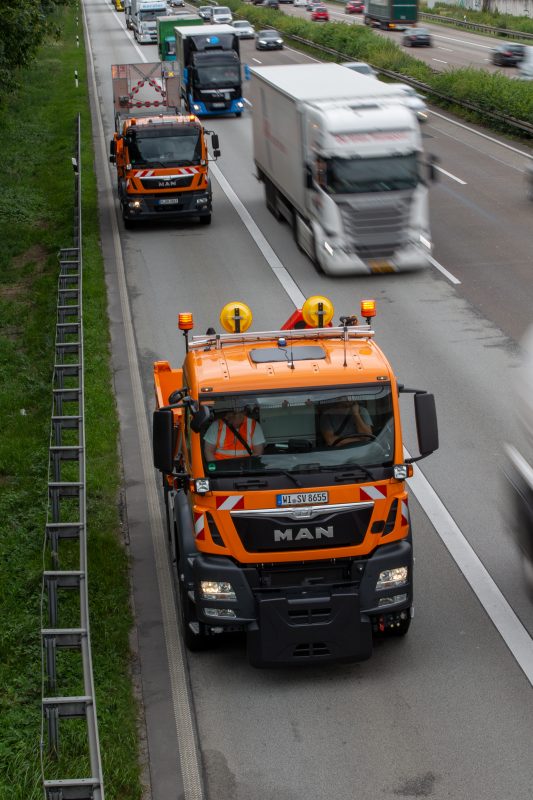 For Joachim Drees, Chief Executive Officer of MAN Truck & Bus AG, this is the most important field of use for electric commercial vehicles: “The urban environment is where eTrucks can truly demon-strate their strengths. They have zero local emissions and therefore contribute to improving the city air. What’s more, they are extremely quiet, meaning that in future it may be possible to make deliveries to supermarkets at night, for example – solving the problem of daytime traffic.”

“For us, one thing is clear: the future of urban passenger & cargo transport is electric. When it comes to city buses too, things are certainly moving in the direction of electric power. For this reason, MAN has concluded development partnerships with Munich, Hamburg, Wolfsburg, Luxembourg and Paris with the aim of incorporating people’s everyday experiences into series development. A prototype of the MAN Lion’s City E will also be on show for the first time at this year’s IAA.”

The next step? To introduce a demo fleet of electric buses into everyday use in various European cities before series production of the battery electric version of the new MAN Lion’s City can finally get under way. This extensive trial will ensure that the vehicles can meet the high reliability standards required for use in local public transport.

In previous years, it was mainly the new bus and truck models that characterised the exhibits showcased by MAN Truck & Bus at IAA. Yet recently, digital innovations have increasingly come into the mix.
“MAN is changing from a manufacturer of commercial vehicles to a provider of intelligent and sustainable transport solutions,” Drees noted, adding, it was for this reason that MAN founded the digital brand RIO in 2016 as a way of connecting the world of transport with the aid of an open, cloud-based platform and making it more economical and ecological.

In order to underline this cross-manufacturer and open approach, RIO has been a separate, independent brand under the umbrella of Volkswagen Truck & Bus since 2017.