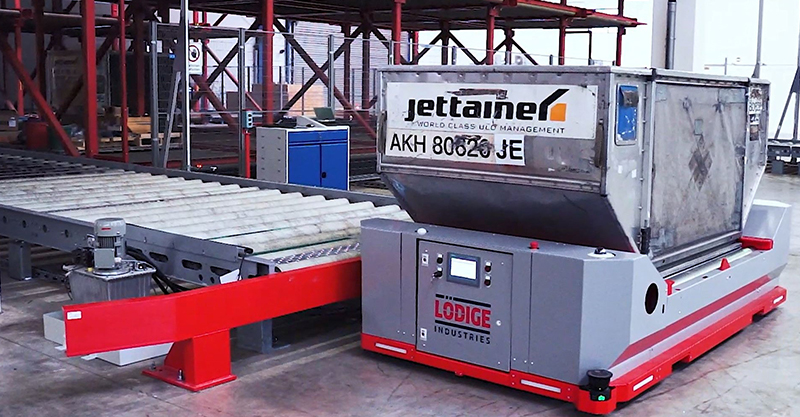 The autonomous vehicle is one of the German-based company’s latest innovations and offers users a high level of flexibility and safety during unit load devices (ULD) transport. The project will start in November 2021 and marks an important step towards highly efficient and automated 24/7 operations.

The AGV is part of Swissport’s commitment to innovative cargo handling processes. With a load capacity of 6,800 kg, the 10ft AGV is designed to transport a variety of ULDs including 15ft containers and can replace the manual transport of ULDs by Slave Pallet Mover or other ground handling equipment.

It also eliminates the need for fixed ground transportation routes. Compared to conventional solutions, this not only frees up personnel for higher-value tasks, but also saves space. The AGV is highly mobile thanks to an omnidirectional drive system making use of a secure laser scanning system redirecting the AGV is case of obstructions on its route.

The AGV’s data-based control gives users full control over operations and allows the integration into a warehouse management system for execution of fully automated transport commands. Within the terminal, the AGV connects several strategic handover positions. These include the roller decks of the fully automated Material Handling System (MHS), the pharmaceutical area, the truck dock and other stations. Between these locations, the AGV covers distances between 60 and 300 meters.

The AGV is Lödige Industries’s latest addition to Swissport’s terminal equipment. When building the 17.000 square-meter facility in 2020, Lödige designed and installed the entire cargo handling system, which already includes automated storage and retrieval systems. The use of an AGV was planned from the very beginning and fits in seamlessly as a complement to the existing systems. Permanent availability is ensured due to the use of a lithium-ion battery system and an inductive charging station.

“The new AGV is an important addition to Swissport’s state-of-the-art facility in Frankfurt, significantly improving the safety, efficiency and flexibility of their processes,” said Björn Ussat, Director Airport Logistics Solutions at Lödige Industries. “Swissport is the first user of our extensively tested AGV. Having equipped Swissport’s terminal with a cargo handling system, we can now support their ambitious plans for an even higher level of automation within the terminal with a reliable and efficient new product that will now prove its performance under demanding conditions.”