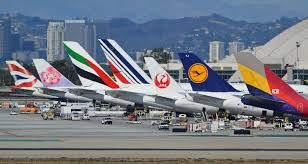 LAX passenger volume increases by 6% in 2015

The passenger volume last year was up 6 percent from 2014, when the airport served a then-record 70.66 million passengers, according to Los Angeles World Airports, the city agency that runs the facility.

The amount of air cargo, including mail and freight, processed at the airport rose 6.5 percent last year, from 2 million tons in 2014 to 2.13 million tons last year.

“The record number of passengers and increased cargo activity at LAX reflect the investments being made at LAX,” said Deborah Flint, CEO of LAWA. “The unprecedented $8.5 billion modernization program includes substantial capital improvements to virtually every terminal at the airport. Another $5 billion will be invested to relieve traffic congestion with a new convenient, reliable and sustainable transportation system that will transform LAX into a world-class airport and improve the travel experience for everyone.”

The total number of aircraft landings and takeoffs at the airport increased nearly 3 percent to 655,564 in 2015, up from 636,706 in 2014. The increase came despite a 27.6 percent drop in charter operations and a 4.4 percent dip in military flights. Commercial airline operations, however, jumped by 7.6 percent while general aviation increased by 12.2 percent.