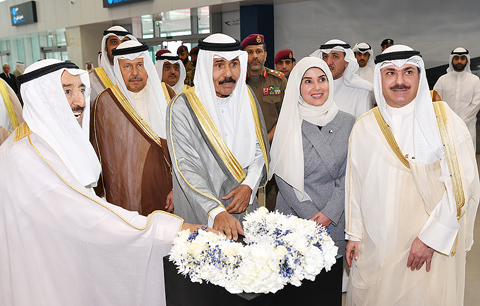 The new terminal, which will be the hub of Kuwait Airways, stretches over 225,000 square meters. It has 14 gates, duty free shops and parking space with a capacity of 2,450 cars.

The government says the increasing number of travelers require Kuwait to step up its development efforts in aviation. Apart from handling more passengers, the new terminal is designed to provide necessary job opportunities for Kuwaitis at the Civil Aviation Department and will develop the capabilities of the national carrier Kuwait Airways.

Al-Sabah thanked His Highness the Amir for supporting aviation projects in Kuwait and noted that the T4 project, part of Kuwait’s Development Vision 2035, was planned and completed within a record time of two years.

He added that the Directorate General of Civil Aviation (DGCA) aims to turn Kuwait into a very active regional aviation center.

The DGCA also aimed to keep up with the growing numbers of passengers, which is expected to reach 40 million passengers annually by 2037, with an expected annual income of no less than $800 million and about 40,000 job opportunities, he noted.

Sheikh Salman said the DGCA’s development plan would focus on investing in manpower, providing local and international training for Kuwaiti youth in the aviation sector. It also involved issuing new aviation laws in Kuwait in accordance with international laws and legislations.

He said the plan includes developing infrastructure and boosting partnership between public and private sectors.