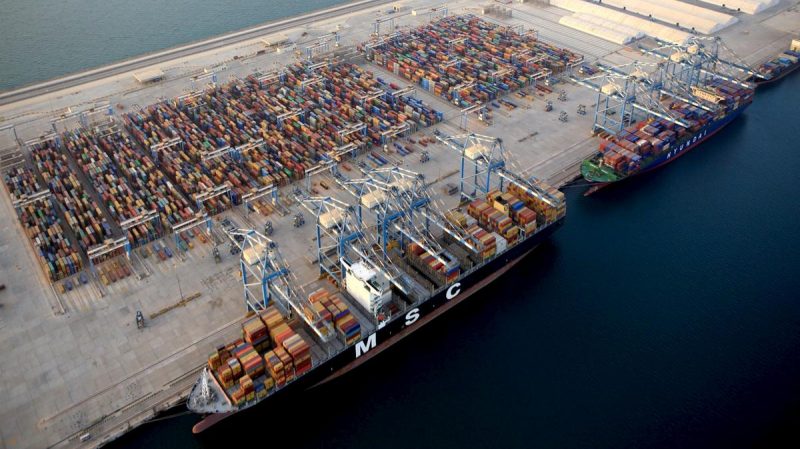 The cranes were shipped from Shanghai, China, and are expected to offer improved container stacking capability to the Cosco Shipping Abu Dhabi Terminal.

With a lifting capacity of 41t each, the cranes are designed to be remotely controlled and swiftly transfer shipments to further increase the capacity of Khalifa Port.

The cranes will be fully integrated with Khalifa Port’s current terminal operating system, allowing it to be the first semi-automated port in the region.

Abu Dhabi Ports CEO Mohamed Juma Al Shamisi said, “The ongoing investment into the port has been a leading factor in the rising demand for services at our integrated logistics hub at Khalifa Industrial Zone Abu Dhabi (KIZAD).

“The terminal will be developed and operated by Cosco Shipping Ports under a 35-year concession awarded by Abu Dhabi Ports in 2016.”

“We are extremely happy with the progress of the Cosco Shipping Abu Dhabi Terminal, which is poised to start operations by end of this year, serving a larger number of customers regionally and globally, and bringing in greater opportunities for business growth for the company.”

Cosco Shipping Abu Dhabi Terminal, which is currently under construction, is the second container terminal at Khalifa Port.

The terminal will be developed and operated by Cosco Shipping Ports under a 35-year concession awarded by Abu Dhabi Ports in 2016.

As part of the concession agreement, Cosco Shipping Ports will operate an initial 1,200m of quay and yard at the terminal.

In addition, Abu Dhabi Ports and Cosco Shipping Ports signed an agreement for the leasing of the container freight station at Khalifa Port.