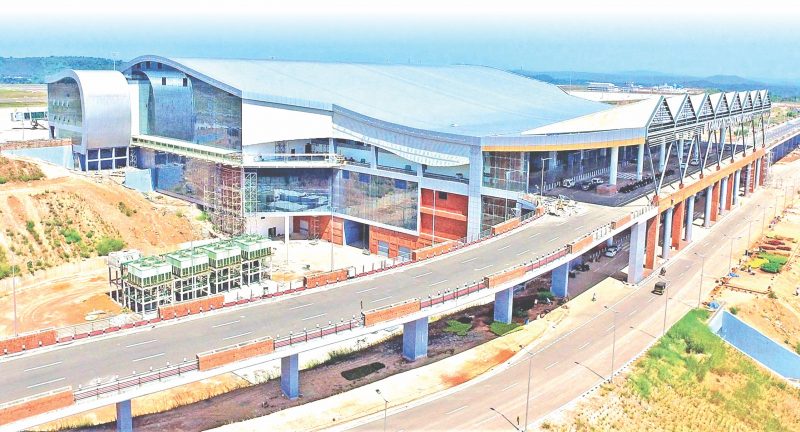 Kannur International Airport: Another gateway to 'God's own country'

The southern Indian state of Kerala, fondly called ‘God’s Own Country’, has been a major tourist destination, not just for domestic but also international travellers with its never-ending array of coconut palms, sun blanched beaches, enchanting backwaters and affable people.

There is a lot of tourist traffic to Kerala. Not just tourist traffic, the expat living, mostly in the Middle East, travel to and from Kerala often. The airport is looking at the catchment area of Kodagu and Mysuru in Karnataka as well as Kerala’s hilly districts of Wyanad, Kannur and Kasargod. In the absence of a nearby international airport, people of this region have had to travel either to Mangalore, Bangalore or Kochi to catch international flights.
To cater to the air traffic demand, the tiny state of Kerala is getting its fourth International airport at Kannur (previously named Cannanore), thus, becoming the first state to have the most international airports in the country.

The other three international airports are—Thiruvananthapuram, Kochi and Kozhikode (Calicut). The first trial flight operations began at the Greenfield airport of Kannur in end-September 2018 when an Air India Express 737-800 flew in from Thiruvananthapuram.

Expressing satisfaction at the first run, the Managing Director of Kannur International Airport Ltd (KIAL), V. Thulasidas, said this was the first trial as per the guidelines of the Director General of Civil Aviation (DGCA). “As far as we are concerned, we are ready with all the mandatory tests. Once tests are done, we are getting another aircraft. Once the DGCA gives the license, then it’s the role of the Airports Authority of India (AAI). We expect the tests to be completed by the end of this month.”

Incidentally, the airport, even before the first trial flight, was active when the State was hit by devastating floods. Naval aircraft engaged in rescue and relief operations had used this airport. 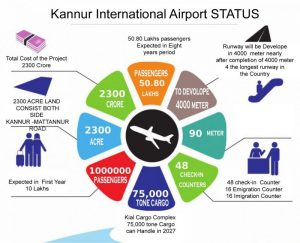 Kannur Airport is forecast to serve over 1.5 million international passengers annually. The highlight of the Greenfield airport is that it will have a runway of 3,050 metres and after 18 months, its length is to increase to 3,400 metres and eventually touch 4,000 metres to accommodate even Code F aircraft (Airbus A-380). When it hits 4,000 metres it will be as good as airports at Delhi (4,430m), Bengaluru (4,120m) and Hyderabad (4,260m).
The airport has a runway suitable for Code E aircraft, like the Boeing B-777 and Airbus A-330. The integrated 95,000 sq meters terminal building, the eighth largest in India, has been built with state-of-the-art facilities.
The passenger terminal building is on 1.033 million square feet and has 48 check-in counters and 16 each emigration, immigration and customs counters. There are three conveyor baggage belts; 12 escalators and 15 elevators. A 750-metre flyover to the terminal taking passengers to different levels is ready for use.

The need for longer runway has been due to the anticipated movement of international air traffic. Kerala’s airports have a distinct trend wherein there are more international travellers than domestic traffic.

In fact, Kerala has beaten Delhi and Mumbai in terms of international travellers vis a vis domestic. Take the instance of Thiruvananthapuram International Airport where out of 100 passengers flying the international: domestic ratio was 56:44 and at Cochin International Airport it was 52:48. The reason is well-known: A number of Keralites are working in the Middle East and they travel at least once a year to their native places.
It is reported that 13 percent of Kannur’s population is employed overseas. 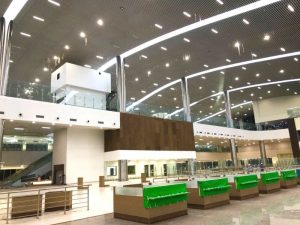 However, with the opening of airports in India and increased connectivity between cities, it is expected that there will be increased domestic traffic and experts are already stating that the gap between international: domestic traffic would be narrowed down in the years to come. In Thiruvananthapuram in 2016-17, the growth rate of domestic passengers was 22 per cent while it was only 8 per cent for international passengers, thus indicative of a trend that will get accentuated.

It is in this background that the Kannur International Airport sees a lot of promise. Besides, KIAL expects a sizable population from North Kerala which might use the airport than going to places such as Kozhikode which is about 100 km away or even Mangalore which is about 150 km away.

The advantage of Kannur Airport is that it is a Greenfield Airport with modern amenities. As mentioned, it has a longer runway, bigger parking bay and a bigger terminal which is going to be an attraction to travellers.
The airport is privately owned and the government has just a minority stake, thus giving the airport authorities room to be flexible and quick in decision-making. The KIAL Board has already given approvals to start a cargo complex, flight catering, ground handling and two hotels in the airport premises.

Mr. Thulsidas, former Chairman of Air India, has stated that the Kannur International Airport will get busy soon as many international airlines and domestic airlines have expressed keen interest of operating from here.
Initially, under the Regional Connectivity Scheme (RCS) or called ‘UDAN’ (Ude Desh Ka Aam Nagrik – Common man will fly), Kannur airport will operate to 11 destinations. Under the RCS scheme, domestic airlines will offer cheaper flights.

The government will compensate the airlines through the viability gap funding (VGF) scheme wherein the funding is by the Central and State Governments and the majority stakeholder of the airport company.
The domestic destinations will be connected by private low cost carriers IndiGo and SpiceJet who have won RCS bids. The domestic destinations include Bengaluru, Delhi, Chennai, Goa, Hubbali, Thiruvananthapuram, Sholapur, Kochi and Hindon (Ghaziabad).

Similarly, international airlines such as Emirates, Qatar Airways, Etihad, Gulf Air, Air Asia, Oman Air, Air Arabia, flydubai, SriLankan Airways, Jet Airways, Air India and Air India Express have expressed interest to operate to and fro Kannur. Air India Express is planning flights to Abu Dhabi, Dubai, Muscat, Sharjah and Riyadh.
Besides, the expats the number of inbound tourists is on the rise. Kerala has been rated by the Lonely Planet as the third best destination in Asia for holidaymakers to visit this year. In 2017, Kerala had nearly 11 lakh international tourist arrivals and with Kannur airport in place, the number should go up.