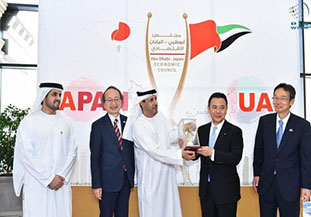 The UAE’s flagship trade and logistics hub, Jebel Ali Free Zone (Jafza), has become a distribution hub for Japanese goods and products and has supported the companies in reaching the regional countries and beyond, said Talal Al Hashimi, Chief Operating Officer, Jafza, to a Japanese Business Forum.

The event was organised by Jafza to promote trade relations and explore future opportunities in various sectors.

Opening the session, Al Hashimi stressed the importance of the forum in strengthening relations between Jafza and the Japanese business community by exchanging views and opinions including business development and growth plans of the companies. Al Hashimi also praised Japanese companies in Jafza for their significant role in the free zone’s journey over the past 30 years and thanked them for their confidence in the free zone’s logistical and administrative capabilities.

“In the last three decades, Japanese companies have played a pivotal role in stimulating trade between Jafza and the various regional countries due to the high export competitiveness enjoyed by Jafza regionally and globally,” Al Hashimi said.

“Trade figures worth $2.7 billion, a growth of 36% over the past five years, and the addition of new Japanese companies annually, reflect the positive movement of the trade within Jafza,” he added.

Speaking at the forum, the Consul General of Japan in Dubai said, “The statistics issued by the International Monetary Fund reveal a strong and stable economy for the UAE that will continue to register an upward trend for the next few years. This is a convincing sign of the opportunities in store for Japanese companies in various sectors here. The Japanese companies realise the importance of Dubai in connecting us to the regional markets and remain the favourite destination for businesses. Trade exchanges between Dubai and Japan have witnessed a steady growth since 2009 and there is a year-on-year increase in the number of Japanese companies in Jafza.”

The forum was attended by representatives of leading Japanese companies including; Sony, Nissan, Panasonic, Nippon Steel, Sumitomo, Komatsu, Toshiba, and Brother International, as well as senior officials from the Japan External Trade Organisation (JETRO) and the Japan Business Council.