IVECO Trucks: Your partner for growth and sustainable transport

IVECO is best known for manufacturing vehicles—special vehicles, light, medium and heavy duty trucks, military vehicles, buses and even engines—that can withstand any conditions, tailor-made based on market needs that can last up to two decades.

Talk about high-powered stylish or fast-racing cars and Italy instantly comes to mind. In the trucking industry, Italy also tops oﬀering durability, fuel eﬃciency and innovative solutions for the daily needs of practically every industry.

One of the leading global trucking companies highly regarded for its innovative solutions is IVECO which stands for Industrial Vehicles Corporation, an Italian industrial vehicle maker based in Turin, Italy with more than 150 years of history, which in 1975 became a merger of Italian, French and German brands, owned by CNH Industrial Group which accounts for the sales of about 150,000 commercial vehicles annually across the world with approximately turnover of EUR10 billion.

In 1980, IVECO made global history when it built the ﬁrst turbo diesel engine for heavy industrial vehicles. Four years later, it launched the TurboStar, a heavy on-road vehicle and in 1985, it introduced the ﬁrst light diesel engine with direct injection. 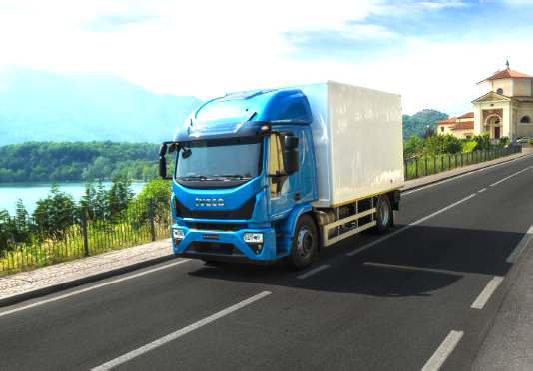 Marco Torta, IVECO Area Manager for Gulf Area, Iraq and East Africa, a company veteran for the past 33 years, said he’s proud to be part of a trucking ﬁrm that helps businesses save money and enhance productivity through innovative solutions for their daily needs.

“ Our company is known for oﬀering innovative solutions that help businesses grow by saving on fuel consumption, comfort for drivers and best of all safety,” he added in an interview at their corporate oﬃce at Dubai Airport Freezone Authority (DAFZA).

I V E C O is best known for manufacturing vehicles—special vehicles, light, medium and heavy duty trucks, military vehicles, buses and even engines — that can withstand any conditions, tailor- made based on market needs that can last up to two decades.

IVECO’s New Daily Hi-Matic is the only vehicle in its segment to oﬀer two engines optimized to deliver the best performance in every mission.

Its 2.3-litre F1A engine is now available in both light- and heavy- duty homologation, with rated power ranging from 116 to 156 hp while the 3.0-litre heavy-duty F1C engine oﬀers three power ratings with increased performance ranging from 160 to 210 hp, as well as a Natural Power compressed natural gas version.

The Daily Hi-Matic Euro 5, which belongs to this family of vehicles, Torta explained, is best suited for all deliveries for all types of businesses. It is capable of carrying 3.5 to 7 tons.

It’s available in chassis cab, single and crew cab, and also as van. The van has 20 cubic meters of capacity and best in class in this segment. It can be custom-built based on the market needs of its owners.
Generally, IVECO’s Daily Hi-Matic can save up to 10% in fuel in urban missions and oﬀers up to 10% maintenance cost reduction.

With a host of features, it stands out for its “fuel economy” feature which boasts of eﬃciency , responsiveness in transient conditions and the exclusive Class A Super Eco Low Rolling tyre s speciﬁcally designed for the Daily and the new 220A (12V) alternator further contribute to the Daily ‘s fuel eﬃciency.

It also has the new Tyre Pressure Monitoring System, which monitors tire pressure in real time so that it is always at optimal level, further improving fuel eﬃciency and safety. It is the only vehicle in its class to oﬀer this feature on both single and twin-wheel models. On top of this, the new, bigger oil sump, which was designed for long-distance missions, extends service intervals to 60,000 km.

The New Eurocargo is IVECO’s answer for a global call for more environment-friendly vehicles in the digital age. This multi-awarded model is built with fuel eﬃciency, new functionality and design, comfort for the driver, among other unique features.

About half a million customers in Europe, Africa, Middle East, Australia and Latin America have chosen this model which oﬀers lower fuel consumption, versatility and durability.

“Eurocargo is very fuel eﬃcient. It is based on European standards, thus, it is sustainable and oﬀer low total cost of ownership and comfort for drivers,” said Torta.

Medium range vehicles are mainly used for missions such as urban distribution and municipal services: this is why Iveco has set performance improvement and fuel consumption reduction as a top priority.
With a range of eight engines, the new Eurocargo adopts two Iveco Tector 5, 4-cylinder, engine power between 220 and 280 HP optimized to suit the typical operating conditions of urban missions.

In addition to the steering wheel airbag and steering wheel controls, the new Eurocargo is available with all the key driving assistance systems, such as the Lane Departure Warning System (LDWS), Advanced Emergency Braking System (AEBS) and Adaptive Cruise Control (ACC). To improve safety and visibility when driving, LED Daytime Running Lights (DRL) have also been adopted as standard. Xenon headlights can be speciﬁed as an option. 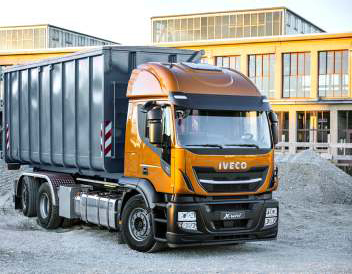 X Way is available with Euro III or Euro 5 engines, 8 – 10 and 13 liters, with power of 310HP up to 540 HP. It’s available with mechanical or automated gearbox and now also with full automatic version.

The Stralis X Way oﬀers 3 three types of cab: Active Day (AD), short cab with low roof, Active Time (AT), sleeper, medium roof and Active Space (AS), sleeper cab which was designed around the driver for long haul mission of the
Stralis.

To satisfy the needs of this area, the X Way is designed with mechanical suspensions and can be supplied with single or hub reduction. Its wide choice of features and components, its structural strength and low kerb weight result in a vehicle that can be conﬁgured for an extensive variety of missions.

IVECO’s new Trakker, the quarry and construction vehicle redeﬁnes the meaning of impossible and enables work on impenetrable, broken terrain, and tackle constant stresses with extraordinary performance.
“Diﬃcult missions, insurmountable obstacles and insuperable limits? Yes we can do it with IVECO Trakker,”
says Torta. 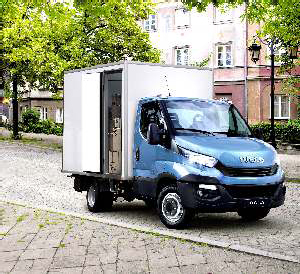 The New Trakker comes with the guarantee of cursor engines for maximum power and durability. It oﬀers top quality of life on board too with three cab versions. And it raises productivity beyond limits while further reducing Total Cost of Ownership (TCO) and minimizing running costs.

This model is very well known in the region with IVECO selling more than 2000 units in the last 5 years.
The New Trakker is available in 2 -3 and 4 axle conﬁguration, prime mover and chassis cab. Its cursor 13 engine is ideal for the most demanding applications in the toughest environments and most adverse conditions. Available on 410 and 450 HP versions, it delivers high torque at low engine speed thanks to its waste gate turbo system.