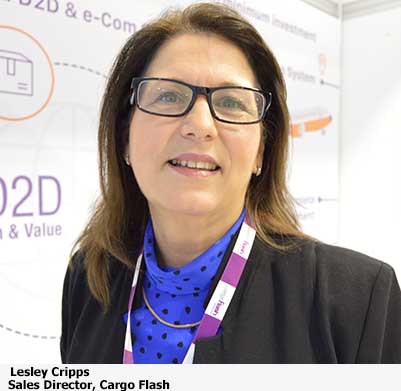 It shouldn’t matter what gender you are, it’s about achieving, at the end of the day I am just doing my job

Transporting goods via air began as early as 1910 when a Wright Model B aeroplane was commissioned to fly between Dayton and Columbus, Ohio to deliver a package of 200 pounds of silk for a store opening.

More than 109 years since the air cargo industry was formally established as vital tool to facilitate way global trade very few women have managed to break the glass ceiling in this male-dominated field though the trend is now slowly changing.

Lesley Cripps is one of those few women in the industry who has remarkably broken barriers and continues to inspire others with her accomplishments, self-confidence and determination to make a difference.

Cripps, a British national, has more than 30 years of experience in the international aviation industry, starting her career with Singapore Airlines.

With proven track record of sales growth and excellent networking skills, Cripps is one of the most sought after cargo executive when it comes to commercial and operations.

After Singapore Airlines, she worked for industry giants Martin Air and Chapman Freeborn before joining Saudia Cargo as Cargo Manager for the United Kingdom.

During the first eight months of her tenure at Saudia, Cripps significantly improved the company’s sales and operations, prompting the management to promote her as the first female to hold the position of Director Europe for both Cargo Sales and Operations.

Always looking out for new challenges, Cripps moved to Kazakhstan and took up a global role with Air Astana as Sales Director Cargo.

Cripps is currently the Sales Director of Cargo Flash, one of the leading IT and business consulting solutions firms exclusively focused on the air cargo industry headquartered in India.

When asked how is it being a female in the cargo industry, Cripps replied “it shouldn’t matter what gender you are, it’s about achieving, at the end of the day I am just doing my job”.

The volatile and dynamic air cargo industry can be taxing mentally and physically and Cripps relaxes by immersing herself in a good book, mostly action packed rather than romantic novels.

“Generally, I like a good book. I’m more into murders and mysteries the likes of James Patterson and John Grisham,” Cripps shared in an interview in Johannesburg, South Africa where Cargo Flash participated in the 5th edition of Air Cargo Africa.

She’s also into biographies and memoirs—real stories of real people that inspire and motivate others.

“There are various inspirational people that I would like to meet or would like to have met; one of them would have been Nelson Mandela”.

Within the industry she would like to aspire and follow in the footsteps of Des Vertannes& Ram Menen, both inspirational aviation professionals who have made a real difference in the air cargo industry.

Desmond Vertannes, former head of cargo at Menzies World Cargo, Gulf Air and Etihad Airways, who also served as Head of Cargo for the International Air Transport Association (2010 -2014) credited for fostering industry collaboration on e-freight, cargo security and handling and modernizing the relationship between airlines and forwarders over a career spanning close to five decades. Ram Menen, the vice president of Emirates SkyCargo widely credited for making the company a global air freight icon who had since retired.

Cripps added that the fact that there are fewer women in the Air Cargo Industry she would like to encourage and inspire more women to not shy away rather confidently become a part of this industry.