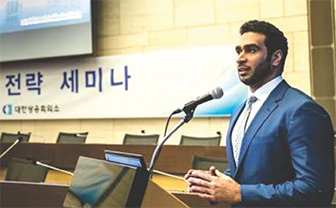 An initiative of the Sharjah FDI Ofﬁce, Invest in Sharjah took part in events in both South Korea and Shanghai to introduce businesspersons in two of Asia’s strongest economies to the emirate’s fertile investment landscape, the government said.

Proponents of the initiative heavily promoted the emirate as being the perfect hub between east and west.

High on the agenda at the events was how citizens from both South Korea and China can now receive a visa on arrival to the UAE, a decision announced in September this year and one taken to promote both tourism and business in the UAE.

Throughout the trip, the Invest in Sharjah representatives showcased the many beneﬁts that investors could ﬁnd in Sharjah, with a strategic special focus on the four key sectors of tourism and leisure, healthcare, transport and logistics and real estate and the environment.

The ﬁrst port of call on Invest in Sharjah’s itinerary saw it travel to Seoul to highlight the array of advantages that Sharjah can offer Korean entrepreneurs who are considering setting up operations in the emirate.

The organisation reiterated that South Korea was already a very important trading partner with the UAE, with bilateral trade between the two countries from 2010 to 2015 reaching AED122.7 billion, of which AED115.8 billion comprised the volume of imports from Korea and AED5.6 billion was UAE exports.

“We anticipate that Korean business interests will expand signiﬁcantly in Sharjah based on our efforts to reveal its array of beneﬁts and the new visa on arrival scheme, which we predict will hugely increase the current ﬁgure of 70,000 Koreans ﬂying to the UAE each year. We expect that the Korean community in the UAE, which has already tripled in the past ﬁve years to reach 15,000 citizens, will grow signiﬁcantly, with new businesses and investments fuelling this growth,” said Mohammed Al Musharrkh, Director of the Sharjah FDI ofﬁce.

Following its visit to Seoul, Invest in Sharjah travelled to Shanghai to attend the Free Trade and Special Economic Zone Summit Shanghai 2016, which took place in the world’s most populous city from December 7th-8th.

Invest in Sharjah says there are many opportunities in the emirate whereby foreign investors can explore. In the freight and logistics industry, the following were highlighted.

Marine & Air Freight – Three deep- water ports, two on the Arabian Gulf and one on the Indian Ocean, and an international airport with more than 20 cargo connections to Asia, Europe and Africa provide the logistics connectivity and baseline infrastructure that power the sector. The market size was estimated at AED 3.53 Bn in 2012.

With much of the infrastructure in place and expansion projects under way, the stage is set for companies to become major players within the sector. Furthermore, the logistics network is prime for traders to build their businesses on reduced costs and faster shipping times.

Freight Forwarding-Despite Sharjah- based companies contributing to more than 9% of the U.A.E.’s foreign trade, only 6% of freight forwarding services for SMEs are based in Sharjah.

F&B Reefer Shipping-There is an opportunity for new reefer forwarders to enter the market, as a large majority of the competition is located outside the Emirate.