Floriculture is an age-old farming activity in India, though it is only off late that the sector is getting organized in terms of production, marketing, exports, branding, and so on.

Though India’s share in global floriculture trade may be insignificant it has potential as an important destination to source flowers. In recent years it has emerged as a profitable agribusiness in India and with international practices being introduced in floriculture, the sector is all set to bloom.

The production and trade of floriculture has increased consistently over the last 10 years. In India, the floriculture industry comprises flower trade, production of nursery plants and potted plants, seed and bulb production, micro propagation and extraction of essential oils.

The annual domestic demand for flowers is growing at a rate of over 25 percent. The global floral production value is estimated at US$55 billion; tree nursery – production of trees, shrubs and other hardy plants is worth another US$35 billion.

India’s share in international market of flowers is negligible. However, India is having a better scope in the future as there is a shift in trend towards tropical flowers and this can be gainfully exploited by India with high amount of diversity in indigenous flora.

According to Handbook on Horticulture Statistics, the total area under flower crops in 2016-17 was 328 thousand hectares. Total area under floriculture in India is second largest in the world and only next to China. Production of flowers was estimated to be 1695000 MT of loose flowers and 528000 metric tons in 2016-17. Fresh and dried cut flowers dominate floriculture exports from India. Total flower production is 2277 (000MT).

US$82 million exports India exported floriculture products worth over US$82 million in 2014-15. Still its overall share is quite low in the global trade of nearly US$40 billion.
There is a great demand for Indian flowers in Gulf countries. Besides the major cut flowers, the export of traditional flowers such as jasmine and marigold is also gaining momentum in recent times.
Among the states in India, Karnataka is the leader in floriculture with about 29,700 hectares under floriculture cultivation.

Other major flower growing states are Tamil Nadu and Andhra Pradesh in the South, West Bengal in the East, Maharashtra in the West and Rajasthan, Delhi and Haryana in the North.

Surprisingly, the small land-holding pattern, considered a handicap for the country’s agricultural production, comes as an advantage in floriculture due to its ‘low volume high value’ character. Since the sector has huge export potential, a number of small and marginal farmers have started turning towards flower production. The north eastern states of India, especially Mizoram, have also turned towards cultivating flowers of export varieties in a big way.

Though major export destination of Indian cut flowers (flowers harvested in clusters or in single along with their stems) were the USA, UK, Germany, Netherlands and UAE during 2014-15, loose flowers (flowers harvested without stalk) like jasmines and marigold are generally exported to Sri Lanka, Malaysia, Singapore and West Asian countries. China, India and Peru are leading producers and exporters of marigold.

The annual world trade in marigold is currently estimated to be around US$90 million. In recent times, flower importers have been shifting their focus to India and Ethiopia for cheaper flowers in the wake of rising cost of production in Kenya—the world’s largest exporter.

There are many drivers for flower exports, one of the biggest is Valentine’s Day which falls on February 14 every year. Marriages, important religious festivals, and other mega events push sales up.

Bangalore, the state capital of Karnataka, is a major producer of flowers. Nearly five million roses are exported every year from Bangalore which produces the best varieties in India.

C.G. Nagaraju, Managing Director, International Flower Auction Bangalore (IFAB) Ltd., said roses were grown on nearly 250 hectares in and around Bangalore, while the daily production was around 15 lakh stems.

The varieties that are in demand are ‘Taj Mahal’, ‘Grand Gala’ and ‘First Red’. He said while roses did not have a market all round the year, they were in demand on certain days, such as Valentine’s Day and Mother’s Day.

In 2017, due to harsh weather in Europe, the demand for long-stemmed roses increased up to 25% with about 4 million stems imported. Major exports are made to European countries, Gulf countries, Australia, New Zealand, Singapore and Malaysia.

The annual world trade in marigold is currently estimated to be around US$90 million. In recent times, flower importers have been shifting their focus to India and Ethiopia for cheaper flowers in the wake of rising production cost in Kenya—the world’s largest exporter.

The Vice President of the South India Floriculture Association Jhansi Lakshmi said the floriculture industry needs support from both the Central and State governments.

He said there is urgent need for a single window system for exporting flowers, with customs and phytosanitation under single window. It is also seeking subsidies & import duty exemptions.

International airlines are tapping this market and one of the top freight carriers is Emirates Skycargo which has witnessed encouraging growth in the export of flowers from major Indian hubs in 2017.

Emirates Skycargo airlifted over 550 tons of flowers in 2016 (January to December) from India and in 2017 it hauled over 200 tons, mostly roses. Other exotic flowers which are in demand include Jasmine, Orchids and Carnations from hubs like Bangalore and Mumbai. 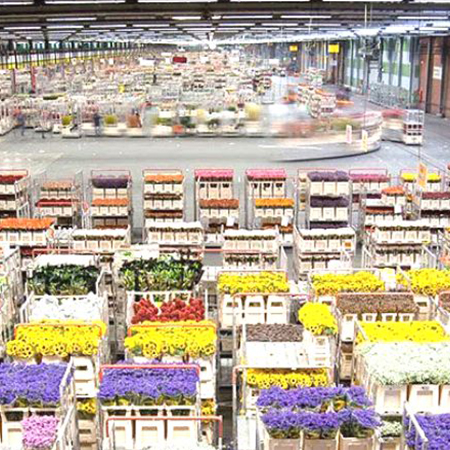 The transportation of flowers by airlines is a year-round activity from its hubs such as Bangalore, Mumbai, Chennai and Kolkata. This year, Bangalore and Mumbai already witnessed a record uplift of close to 150 and 80 tons, respectively, in just the first two months of the year.

Keki Patel, Cargo Manager (India & Nepal) at Emirates SkyCargo, said: “Many regions in India have the ideal climate for cultivating flowers all year round, offering excellent growing conditions. We have witnessed a surge in flower demand this year from destinations like Europe who have experienced a harsh winter this year. We have reported strong volumes of flower transport in the weeks leading up to Valentine’s Day this year which will play a substantial part in the total yearly volume recorded for 2017.”

Sophisticated logistics by Emirates SkyCargo ensures quick and reliable air transport of these delicate goods to destinations across its global network. State of the art equipment and facilities help avoid the wilting of flowers.

Roses are hand harvested and then sorted, arranged in bouquets and hand-packed into boxes, which are then loaded on the aircraft. Key destinations Emirates SkyCargo has transported Valentine’s Day flowers are Amsterdam, London, Gulf countries like Kuwait Bahrain and the UAE, US destinations like New York and San Francisco.

Other airlines such as Qatar Airways, Etihad Airways & the Indian Int’l air carriers do carry horticulture and floriculture produce from India to the Middle East & beyond.