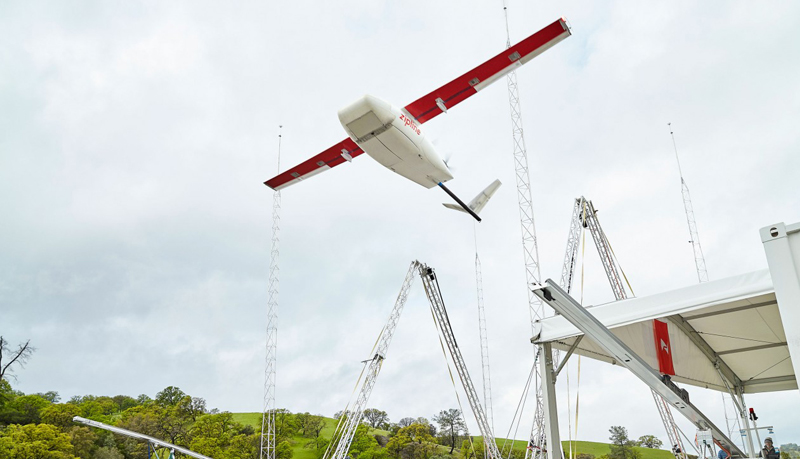 India is vast and diverse with a huge population of more than 1.366 billion people. And it has long been battling problems with transportation, bad roads, with 33 percent of the country’s villages still do not have access to all-weather roads, limited healthcare resources, among other issues with infrastructure and basic social services. Recently, it turned its sights to drones to deliver emergency aids, medicines and organs to reach even its remotest villages. Drones are no longer limited to military use. Its scope of use iAs unending and the opportunities are huge no matter where you are.

Apollo Hospitals Group, one of India’s top hospital chains, has tied up with US-based Zipline to launch drone healthcare delivery solutions, after getting impressed by its impact in Rwanda’s healthcare system and most recently, in Ghana.
The Group will explore and leverage drone technology to deliver emergency aids and organs. The concept was formally introduced by Apollo Hospitals Joint Managing Director Sangita Reddy at the recent World Economic Forum held in New Delhi. The idea of using drone in medical care has been under plan for the last couple of years.

The Indian state of Telangana will launch the program to see that delivery of blood and other life- saving drugs are transported through drones. The concept will be launched with a six-month pilot project ﬁrst, for which a request for proposal has been ﬂoated.

There are plans to integrate Telangana’s healthcare delivery systems as it moves along. The private partner will be HealthNet Global Limited , acompany of Apollo Hospitals Group.Saving lives Reddy, who is also the Senior Vice
President of the Federation of Indian Chambers of Commerce & Industries, believes drones would greatly contribute to saving lives in India, especially those in remote villages.

“Apollo Hospitals Group company HealthNet Global Limited truly believes that the use of drones for transport of organs and other medical aid will contribute to saving many lives. We are happy working with the World Economic Forum and the government of Telangana, as a clinical partner in this drones project, which I am sure is the next step in our journey of remote healthcare delivery,” said Reddy.

This is indeed good news in India’s healthcare segment where last mile delivery of life-saving medicines is a challenge. And Zipline has already proven in Africa how it can disrupt for the better the delivery of medical supplies as was the case in Rwanda and Ghana.

Zipline’s roaring success in Rwanda One must watch the Ted Talk of Keller Rinaudo, the co-founder and
CEO of Zipline, where he talks about how drones are changing the healthcare eco-system in Africa where most people dread to even think of deploying technologies in this part of the world. The enterprise they are creating in Africa is impressive.

Zipline started in 2014 and has built the world’s fastest and most reliable delivery drone and the world’s largest autonomous logistics network. Its drones are assembled in Half Moon Bay, California. Till date, the company has ﬂown over 2 million km and it is not stopping there. It’s going more global.

Keller Rinaudo said Zipline delivers about 20 percent of Rwanda’s blood supplies through drones and the best part is zero units of blood have expired in all the deliveries. The average delivery times are between 20 and 30 minutes.

The co-founder acknowledges the eﬀorts of the Rwandan government and the people for embracing this radical technology. Zipline is providing 13 million people with instant access to urgent medicines and its mission is to provide every human on earth with immediate access to vital medical supplies.

A Zipline drone typically has a 1.8 kg payload and a single ﬂight can deliver up to 3 units of blood. For larger orders, multiple drones are sent at the same time.

Zipline states that today, too many people are underserved by last century’s limited solutions: trucks, trains and washed-out roads. The company leap-frogs these outdated solutions with a cost-eﬀective drone delivery network, revolutionizing access to healthcare.

It is a simple but technology-driven solution. The distribution pattern is easy to understand. Doctors place orders on-demand through an app for any medicine they need, when they need it. Medical products which are stored centrally at Zipline’s distribution centers are ﬂown quickly to any destination, as per demand.

This maintains cold-chain and product integrity, while eliminating waste. Zipline packages the order, then launches it into ﬂight. Racing along at over 100 km/h, vital products arrive faster than any other mode of transport. The drones are unmanned and are battery-powered, thus reducing the cost and emissions of moving medicine.

The medicines are delivered by a parachute and recipients do not interact with the drone, while everything is taken care of from the launch/distribution center. After delivery, the drones get back to thedistribution center, for its next trip. Zipline has reﬁned this process to support hundreds of deliveries per day, per distribution center, in all weather conditions.

In Rwanda, Zipline has been making lifesaving deliveries every day. Dozens of hospitals and health facilities now rely on Zipline’s vital service to improve patient care. “Our drones now cover the country, giving doctors instant access to critical medical products, like blood and vaccines, that were previously out of reach.”

Because of Zipline, thousands of children will grow up with their mothers, women who would have otherwise lost too much blood due to postpartum hemorrhage.

In April 2019, Ghana also turned to Zipline for its healthcare needs. Zipline plans to reach out to the country’s 29 million population with access to any medical products they need, with four distribution centers spanning from the dense southern regions surrounding its capital, Accra, to the remote and arid north of the country.

India’s ‘Medicines from the Sky’

Buoyed by the successes in Africa, the government of Telangana is keen on introducing the project called ‘ Medicines from the Sky ‘ , to commence in early 2020. The World Economic Forum has collaborated with m ultiple drone s tart-ups , including those in India such as India Flying Labs, Adani, Aarav Unmanned Systems, Marut Drones, Asteria and more.The Information Technology Minister of Telangana, K.T. Rama Rao, said the project had potential to become a model for other states to look at drone applications for healthcare delivery.

“Telangana has been a pioneer in using technology for improving the lives of the citizens. Using drones todeliver blood and other medical goods to people in remote and inaccessible areas is an exemplary project that demonstrates the use of technology for the social good,” said Rao.

Zipline has also tied up with Maharasthra government and this project is also expected to go operational in 2020.

There is a lot happening in India when it comes to drone technology. Consultancy ﬁrm BIS Research said the Indian drone market is expected to be valued at $885 million by 2021.

In June this year , Zomato successfully tested the country’s ﬁrst drone food delivery system. It used a hybrid drone that covered a distance of 5 km in about 10 minutes with a peak speed of 80 kmph to deliver a
food packet.

The test run was approved by the DGCA which later asked companies to submit an expression of interest (EoI) for conducting experimental Beyond Visual Line of Sight Operations (BVLOS) of Remotely Piloted Aircraft Systems (RPAS)/Unmanned Aircraft Systems.

Tata Steel is also working with Skylark Drones to deploy them at their Noamundi iron ore mines in Jharkhand, for compliance reporting and monitoring volumetric production. DeTect is working with Hindustan Petroleum, Indian Oil and Gas Authority of India Limited.

Drones are here for good. Apart from military applications, its scope of uses is unending and we are seeing that coming slowly up on the horizon. The opportunities are huge and so could be the challenges.