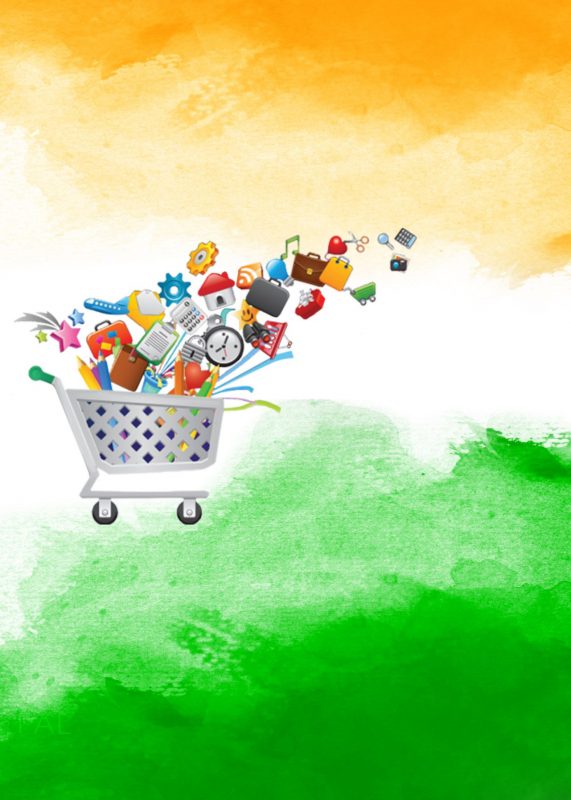 It is a global phenomenon where online sales are just skyrocketing for the many advantages it brings along with it. In India, the e-Commerce industry is seeing high growth and this is likely to catapult further as the digital sector expands and as retail players keep innovating on delivery systems.

In 2017, online retail sales touched $17.8 billion in gross merchandise value (GMV) from $14.5 billion last year, a healthy increase of 23 percent. The sales picked up in the second half, according to RedSeer Management Consulting, a market research and consulting firm. It was the big players such as Amazon India and Flipkart Ltd which were the main drivers, along with Paytm E-commerce which got a tremendous boost, post demonetization of India’s currency.
The RedSeer report said the trend would continue and accelerate in 2018, projecting that the e-commerce market may hit $28 to $30 billion in GMV, a staggering 60 percent growth.

In fact, in the Indian Parliament, the Minister of State for Consumer Affairs, C.R. Chaudhary says “India’s e-Commerce market is estimated to be $33 billion in the 2017-18 financial year.”

The acceleration would come through aggressive marketing by the e-Commerce companies, backed by technology infusion such as faster internet speeds, huge discounts, prompt deliveries, easy returns, easy payment options besides other value additions.

The consulting firm indicated that with such growth, the e-Commerce segment would see new online shoppers come into the space, not just from urban areas but also semi-urban areas and even rural pockets. And during festive season, sales always skyrocket.

In last year’s year end sale, Indians spent around $3.2 billion. Both Amazon and Flipkart notched up impressive sales, claiming growth of 4.5 to 5 times during the festive period over a non-festive period.

The big e-Commerce players are betting big. Amazon for instance has invested about $1 billion in its e-commerce business in India since the beginning of January 2017.

Amazon Seller Services, the largest arm of the US company in India, has had three rounds of capital infusion in 2017. In all it has invested heavily in India operations at $2.7 billion and the American company is keen on becoming number one player, outperforming Flipkart which claims to have a cash reserve of $4 billion.
The e-retail industry has galvanized the domestic cargo segment with an expected contribution of about $760 million in this fiscal, of which the air cargo segment would account for $152 million, according to an Express Industry Report 2018.

The way Amazon and Flipkart have made inroads into online commerce is amazing, with the two accounting or almost 80 percent of industry revenues and there are more entrants coming on the scene, enhancing competition significantly.
The report said the dynamic and competitive nature of the e-retail segment has brought in many new trends for the industry such as adoption of alternate delivery methods, customer centric delivery, shift from air express to surface express, increase in regional movement, adoption of technology and expansion to remote locations, the express report underlined.\

The report titled “Indian Express Industry-2018: A multi-modal play in building the ecosystem” forecasts this growth as being primarily driven by the growth of cross-border and domestic e-Commerce in India, and significant demand from the small and medium B2B segment.

The Minister for Commerce & Industry and Civil Aviation, Suresh Prabhu who launched the report said, “The express industry is a key enabler for the growth of India’s trade and economy. Factors such as ease-of-logistics will increasingly play a critical role in attracting investments into the country, which will, in turn, support the development of several industries involved in manufacturing. We are pleased to see the industry sustaining its growth momentum, and also acting as a major contributor to employment generation within the country.”

The report highlighted that with the rise of new age business models and SMEs, and economy on the path of revival, there has been a considerable focus on improving India’s logistics performance.

It also indicated that the industry grew at 15% CAGR over the past five years and is estimated to be worth 335 billion $ in FY17. In FY17, the express industry contributed $456 million in Service Tax and $300 million in Custom Duties besides direct taxes around employment creation, thereby contributing to the national exchequer.

The study attributes e-retail to be a major growth driver for the industry with over 13 lakh shipments from this sector shipped daily.

Speaking about the industry outlook, Mr. Vijay Kumar, Chief Operating Officer, EICI, said, “The express logistics landscape is undergoing a huge transformation due to the need for time bound delivery services to complement the growth of trade. As a key enabler of trade, the industry will also support and benefit from the e-retail boom in India. We also anticipate the express industry to provide a significant boost to India’s employment base to increase to 26 lakhs. Regulatory and policy changes and infrastructure enhancements will also give a much needed fillip to the industry, which will positively impact the growth of other sectors.”

Established in 1997, the Express Industry Council of India (EICI), a not-for-profit organization, is the apex industry association that represents leading international and domestic express companies in India.

EICI with Indian Customs has jointly and successfully developed and implemented a state of the art electronic Express Cargo Clearance System (ECCS) for Custom clearance of express shipments, which will increase India’s global competitiveness.

The Council has favoured re-evaluation of a policy to allow domestic cargo airlines offer operations in foreign countries to create a level playing field with international cargo operators.

Domestic cargo airlines have a share of 760 million in the overall express industry in India. The express industry, of which cargo airlines are key constituents, has also sought ease in regulations for air cargo infra-structure to flourish, as development and usage of airport facility is posing a challenge for the industry.
The report called for time-bound approval from agencies such as Bureau of Civil Aviation Security (BCAS) for commissioning of cargo and express terminals.

“While the domestic express industry is seeing a healthy growth, we want more cargo airlines to operate in the market. Re-evaluation of the policy to allow them to offer international operations will not only bring more operators but give us a level playing field with respect to international cargo operators,” said Vijay Kumar.
At present, the notable player in domestic cargo airlines is Blue Dart Express, while other small players came and vanished.

Regulations, however, continue to pose a hurdle for the industry.

One of them is that the lease period is limited to 10 years. Express operators contended that since they need to make significant amount of investments to develop infrastructure, the lease term should be increased to 30 years.
Other issues such as delay in customs approval to operate facilities and insufficient number of CISF personnel to man cargo terminals, were flagged by the report.