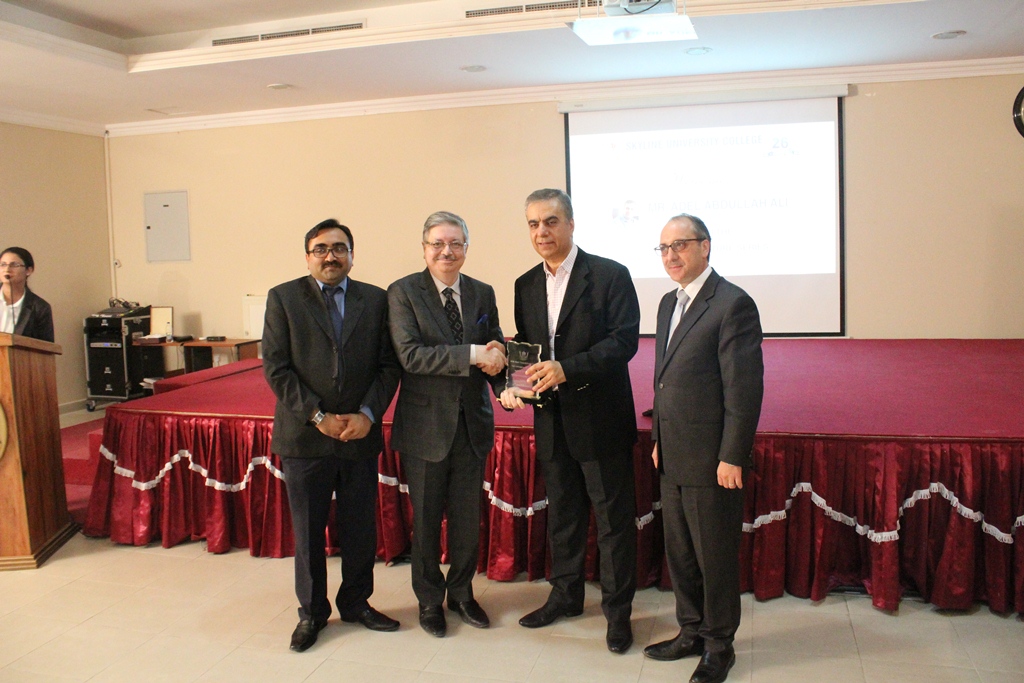 Skyline University College (SUC), Sharjah, hosted the sixth edition of CEO Lecture Series on February 3, 2016.
Hundreds of students who attended the event looked spellbound by the inspiring lecture from czar of the aviation in the Middle East.

The guest speaker who delivered the speech, this time, was Mr. Adel Abdullah Ali Board Member and Group Executive Officer Air Arabia, and he spoke on the topic Inspiration Vs. Motivation – A Pathway to SUCCESS: “How to build an Inspiring and Meaningful Career.”

Adel A. Ali is well known for being at the forefront of the development of modern aviation. His innovative achievements and contribution to air transport and tourism sector in the wider Arab world are globally recognized. He managed to transform Arab aviation in October 2003 when he set up Air Arabia, the Middle East and North Africa’s first low-cost carrier (LCC), opening up a market niche in the region whose existence few had suspected.

The pioneering aviator drove Air Arabia’s growth in the next eleven years into the largest low cost carrier in the MENA region, as well as the first publicly owned airline in the Arab World and it’s largest by market value
Speaking about the purpose of this series Dr. Amitabh Upadhya, Professor, Dean, ‪Skyline University College, Sharjah said, “We started this CEO series last year and we did not know that how popular it became. The purpose of organizing this was that we wanted to bring the practicing managers to the college.”‬‬‬‬

Going on further and speaking about the growth of Air Arabia the MENA region Dr. Amitabh enthused, “Air Arabia was the first no frills airlines in the entire MENA region and the person who helmed its launch and subsequent growth Mr. Adel Ali is the most coveted speakers that SUC has invited for its CEO series so far. Students, faculty and staff of the University were delighted by the once in the lifetime discourse and the wonderful experience.”

Mr. Adel A. Ali seemed very excited while interacting with the students and the staff of SUC and said, “It is all for development of the students. The real life experience of any CEO is always a new learning experience, having multiple CEO’s speaking about their experiences will mean that the students get to learn from multiple real life experiences. ”
Skyline University College is one of the leading and most prestigious universities in Northern Emirates. It has carved a prestigious image for itself in the educational field as well as in local, regional and international markets for being a quality business education institute. It is the first private university in UAE to celebrate Silver Jubilee.
When it comes to teaching staff, Skyline has the most experienced and qualified faculty members holding PhD degrees in different field of specializations in Business and Management.