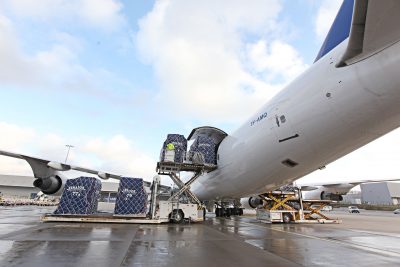 In the first half of 2017, Frankfurt-Hahn Airport sees a strong increase of its cargo business. The airport reports a record growth of more than 50 percent in the first six months of the year.

Frankfurt-Hahn Airport could not be more satisfied with the first half of the year as its cargo volume shows a record growth. 49.000 tons of freight were handled at the airport from January to June. This marks a gain of 52 percent compared with the first six months of 2016. In June alone, the airport reports 8.670 tons of freight, a plus of 101 percent compared to June 2016.

“All signs point toward growth”, quotes Roger Scheifele, Senior Vice President Cargo Sales & Business Development at Frankfurt-Hahn Airport. During the last months, the two biggest cargo-clients of Hahn Airport, Silk Way and Nippon Cargo Airlines (NCA) have increased their freight volumes. Further more, Silk Way Airlines sees a growth of 10 percent in its numbers of flights. In addition, the airline Etihad has added two weekly connections. Roger Scheifele is also very pleased with the development of the cargo flights by the logistics company “Senator International and the airline” Air Atlanta Icelandic”, that started off last year. “With two weekly connections to the USA we see a stable development with the potential for more growth for this client”, quotes Scheifele.

The growth in the cargo business is also based on a strong charter business. “The continued hard work of the sales team has led to the acquisition of numerous new customers”, quotes Scheifele. „Time and time again, we prove our particular expertise in this field” he adds. Whether large and bulky, high or long – Frankfurt-Hahn Airport is able to manage all kinds of special cargo. In addition, the airport sets a focus on live animal transport in regard to the corresponding qualifications.

Speaking about the volume of passengers, Frankfurt-Hahn Airport sees a growth rate which is slightly below the numbers of the first six months of 2016. From January to June 2017, 1,8 million passengers were handled at the airport, a loss of five percent compared to the previous-year period. In June alone, 229.640 passengers were counted, five percent less than in June 2016.

“Therefore it is all the more important to strengthen the passenger business”, quotes John Kohlsaat, Sales Director at Frankfurt-Hahn Airport. He sees growth opportunities for expanding the cooperation with tour operators because more and more operators are offering package tours starting at Hahn Airport. Most recently, tour operator TUI has included Frankfurt-Hahn Airport in its portfolio and reports high booking volumes. “We intend to further improve this business segment”, says Kohlsaat

Frankfurt-Hahn Airport runs flights to more than 50 destinations in Europe and Northern Africa offered by the airlines Ryanair, Wizz Air and SunExpress.