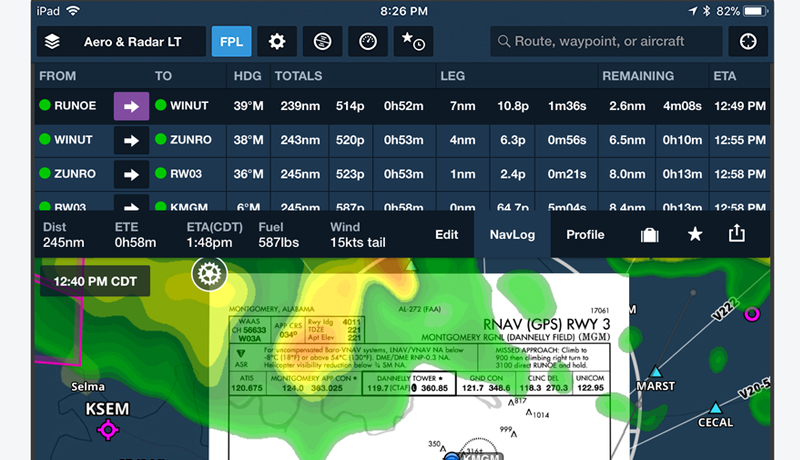 ForeFlight recently released an updated version of its ForeFlight Mobile electronic flight bag app, adding a long-asked-for feature: iOS multitasking. This allows users to run two multitasking-capable apps side by side on an iPad, with full functionality for each app. Other new features include internet traffic, customizable menus, and iPhone flight planning updated to match ForeFlight planning on the iPad. These features are included for all subscription levels.

A simple way to demonstrate the multitasking capability is to open the Apple clock app then slide up ForeFlight so both are multitasking. While ForeFlight is running, the clock’s timer can be set to countdown time an approach, for one example. Any apps that allow multitasking can run side-by-side with ForeFlight.

Internet traffic is a new feature available on the iPad and iPhone. Powered by FlightAware, internet traffic is selectable from the overlay menu. When internet connectivity is available, this layer shows traffic on the ground and in the air, with the same information available as ADS-B traffic by tapping the aircraft symbol. Once in the air and disconnected from the internet, the traffic layer reverts to ADS-B traffic if the device is connected to an ADS-B In receiver. It is possible to view internet traffic in the air when connected to the internet via Gogo or a Satcom Direct Router, but this is not the same as ADS-B traffic. According to ForeFlight, “[It] uses the distinct position reports received from FlightAware to interpolate each airborne target’s movement and display it smoothly on the map.”

The benefit of the internet traffic layer, according to ForeFlight co-founder and CEO Tyson Weihs, is to see how weather is affecting airports and potential routing during the planning process. “It’s helpful to understand what’s happening at the airport or along the route of flight,” he explained. Pilots can also use that feature before takeoff to see which departure and arrival procedures and runways are being used at the departure and destination airports. With internet connectivity in the air, he said, “You can look long-range and see weather effects and what traffic is doing further down route.”