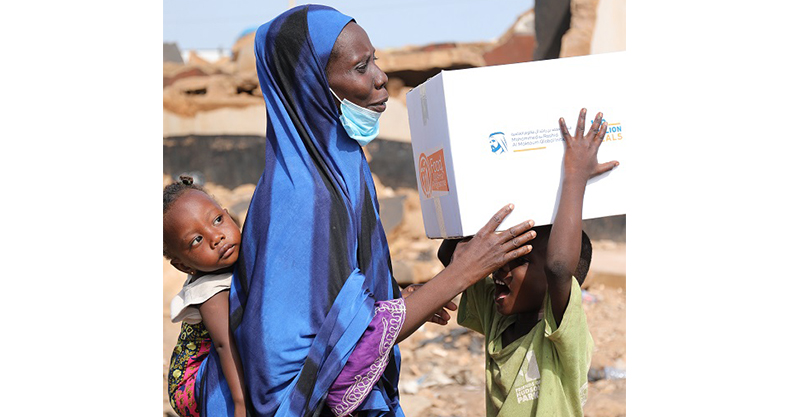 DUBAI: The UAE’s global distribution of food has begun in three African countries namely Ghana, Angola and Uganda targeted under the ‘100 Million Meals’ campaign, which aims to provide food aid for disadvantaged communities in 30 countries.

The campaign’s organiser, Mohammed bin Rashid Al Maktoum Global Initiatives (MBRGI), is collaborating with local food banks and charities in the beneficiary countries to ensure swift and integrated food distribution to those in need.

Low-income individuals and vulnerable families in Uganda, Ghana and Angola started receiving parcels packed with essential food items to empower them to prepare their meals throughout the Holy Month of Ramadan. Every AED1 donated to the ‘100 Million Meals’ campaign provides one meal in targeted countries.

The MBRGI is collaborating with the non-profit organisation ‘Good for all in Ghana’ to carry out logistical operations and fieldwork to swiftly distribute food aid to those in need.

Vulnerable groups in Zongo communities and slums within the capital Accra will receive food parcels, enough to secure 2.5 million meals in Ghana.

In Angola, MBRGI is collaborating with the ‘Food Bank of Angola’ to distribute food parcels, equivalent to 1.25 million meals, to underserved homes and residences across Luanda.

In Uganda, the MBRGI is working closely with the “Haba Na Haba” Food Bank in Uganda to carry out efficient and swift food distribution to low-income individuals and families across the country. Using the food bank’s database to reach those in need, food parcels will secure 1.25 million meals across Uganda.

Food distribution is currently underway in several countries, namely Egypt, Jordan and Pakistan, in coordination with local and regional authorities to accelerate the delivery of food aid to vulnerable groups.

As part of the ‘100 Million Meals’ campaign, the Mohammed bin Rashid Al Maktoum Humanitarian and Charity Establishment is distributing food parcels across part of the 30 targeted countries, in coordination with the local authorities and charity institutions.

MBRGI is cooperating with the UN World Food Programme to distribute biometric-protected cash vouchers to beneficiaries in Palestine and refugee camps in Jordan and Bangladesh to purchase their food and with the Food Banking Regional Network as an umbrella for local food banks in 12 of the campaign’s targeted 30 countries.

The ‘100 Million Meals’ campaign provides easy-to-store food parcels of basic and packaged foodstuffs to facilitate their transportation and distribution across countries of different climates, without the need for refrigeration. The parcels empower disadvantaged families and individuals across 30 countries to prepare their nutritious meals throughout the holy month of Ramadan, forming a food safety net and providing a chance to a dignified life among poor populations.

The ‘100 Million Meals’ campaign achieved its target within only 10 days of its launch, raising AED100 million in donations from individuals, businesses, and organisations, inside and outside the UAE.

Donations continue to pour in for ‘100 Million Meals’ even after achieving its target within 10 days of its launch. Companies, businessmen and members of the public can donate on the campaign’s website www.100millionmeals.ae; or by making a transfer to the campaign’s bank account through Dubai Islamic Bank (AE08 0240 0015 2097 7815 201); by sending “Meal” on SMS to the UAE specified numbers (Du or Etisalat) listed on the website; and by contacting the campaign call centre on the toll-free number 8004999.