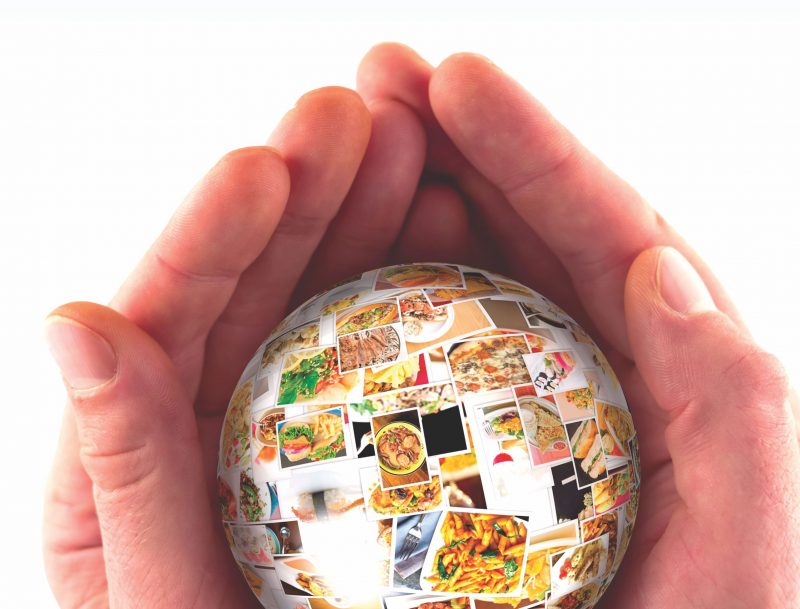 The air cargo industry may just account for transporting a third of world trade annually but those are high value goods worth trillions.

In recent years, much of these air flown goods constitute fresh produce from different farming villages immediately transported to various cities across the world as the demand for healthier food options get stronger.

The food and beverage industry has become so big it contributed US$77.5 trillion in global economy in 2017, largely driven by the rise in population, urbanization and growth in middle class in emerging markets within Asia-Pacific, the Middle East and North Africa, according to leading market research firm Euromonitor International.
Consumer expenditure on food and beverages was pegged at US$6.6 trillion or 8.5 percent of world GDP in 2017. Much of the growth was seen in Asia-Pacific, the Middle East and Africa. 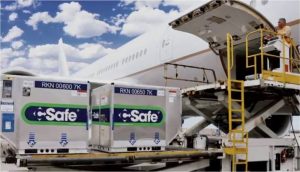 Air flown food is common practice nowadays that it’s not surprising to see guests at a wedding reception in Shanghai eat succulent lobsters freshly harvested from Halifax, Canada flown within hours after being plucked from the waters. Lobsters are a must in weddings in China despite high value on belief that they bring luck to the couples.

China’s new rich consume lobsters at unimaginable proportions helping Canada’s lobster industry—mainly in the maritime provinces of Nova Scotia, New Brunswick, Prince Edward Island and Newfoundland—to grow more than $5 billion in value annually. The demand for these crustaceans is also high in Europe, Japan, Korea and Thailand.
In Dubai, airlifting food from all corners of the world at whim is also common—mainly among the affluent class. Wines from California, Chile, Argentina, France, etc. Caviar from Russia. Fresh seafood from Japan. Salmon from Norway. Edible flowers from Thailand or Africa. Chocolates from Belgium or Switzerland. Truffles from Italy. Lamb from Australia. Cheese and dairies from France. And the list goes on.

And millions of expatriates in Dubai and the rest of the United Arab Emirates, including millions more in nearby countries around the oil-rich Middle East like Saudi Arabia, Kuwait, Bahrain, others, are also heavily dependent on air freight for their food on a regular basis. Poultry and processed meat from Brazil, New Zealand, Africa and Australia; grains and legumes from South Asia, Africa, Asia; vegetables and fruits from India, Iran and Pakistan, and so on.

Grapes, cherries, oranges, pomegranate, among other seasonal fruits, from Turkey, Egypt, Lebanon and Iran, are also regularly flown to Europe and other parts of the Middle East via air freight.

And the demand for air transported fresh vegetables and fruits, fish, seafood, meat and dairies, and processed food is forecast to grow even more as consumers’ appetite for food variety and healthier options get stronger.

Emirates SkyCargo, the freight division of Emirates, said it transported close to 400,000 tons of perishables year-on-year since the launch of its specialized service Emirates Fresh in April 2017 and is bracing for more shipments in the second half of this year.

The Dubai-based freight carrier said fruits and vegetables were the largest category of perishables it transported at 150,000 tons with more than 20 percent sourced from India mainly for the UAE, home to a large expatriate population from all over the world.

“The three different service levels of Emirates Fresh allow us to respond to the varied needs of perishables exporters. We continue to work with our customers and to invest in and develop Emirates Fresh as well as our other sector specific offerings. This is what helps us stay ahead of the game,” said Nabil Sultan, Emirates Divisional Senior Vice President, Cargo.

The freight carrier transported over 65,000 tons of seafood and close to 60,000 tons of meat during the period.
Salmon from Norway to East Asia, seafood from South Africa and Uganda to Europe and premium meat from Melbourne to the Middle East, were some of the high-value seafood items it carried along with close to 25,000 tons of meat exports from

In neighboring Saudi Arabia, food and agriculture imports were valued at US$19 billion in 2014. As the largest consumer of food products in the GCC region growing at 18.5 percent annually, analysts forecast the Kingdom’s food imports to reach US$70 billion per annum in the next five years.

The Kingdom’s lands and weather are not suitable for farming, thus, it resorts to food importation mainly sourced from India, Brazil, Germany, France, Egypt and Argentina. And food imports keep the government-owned Saudia Cargo busy all year.

“Despite the slowdown in economy, Saudi Arabia’s food consumption is forecast to grow by 7.3 percent in 2016, to SR224.5 billion and projected to reach SR259.4 billion in 2018. In sum, capital spending in the food sector will expand further, while the value of the casual dining sector will increase at a growth rate of 3 per cent per annum,” said Anees Moumina, CEO of Sedco Holding Group, a leading Shariah-compliant organization, in his interview for The Hotel Show Saudi Arabia.

Turkish Cargo, now ranked as the 8th top freight carrier, is also doing good in terms of perishables, helping in the process to make Turkey’s agricultural products a global brand. The carrier also transports live fish and other seafood products to Oman, Kuwait and some countries in Africa like Ghana.
American Airlines is also doing great in transporting fresh produce. During the first half of 2018, the company moved nearly 12 million pounds of fresh asparagus around the world, helping in the process growers from Mexico and Peru.

“The majority of what we move is green asparagus, but we do move very small amounts of both the albino and purple varieties. And because they are all fresh spears, they do require careful specialized handling,” shared Joe Goode, American Airlines Cargo’s managing director, Sales – Western Division.

“In addition to moving significant volumes of asparagus, we also move large volumes of lettuce, radicchio, tomatoes and mangoes into Asia over the same period of time,” he added.

This spring, American carried multiple shipments of the vegetable on a daily basis between Los Angeles (LAX) and Tokyo (NRT). To put it in perspective, just in 2018 so far, the airline shipped enough asparagus spears to span 8.5 Tour de France routes (one of which is a collective 2,200 miles) when lined up end-to-end, or enough to fill nearly 240 space shuttles.

The world’s insatiable appetite for air flown food is not only benefitting the air cargo industry but the cold chain market and the rest of the supply chain as well.

Markets and Markets, a data intelligence company servicing 7,500 customers worldwide including 80% of global Fortune 1,000 companies, estimate the cold chain market to grow to US$293.27 billion by 2023 as international trade of perishable foods increases.

“The global cold chain market is estimated to account for US$203.14 billion in 2018 and is projected to reach US$293.27 billion by 2023, at a CAGR of 7.6%. The global cold chain market is expanding with considerable growth potential over the next five years. The growth of this market can be attributed to the growth of international trade of perishable foods, technological advancements in refrigerated storage & transport, government support for the infrastructural development of the cold chain industry and increase in consumer demand for perishable foods,” the research firm said in its report Cold Chain Market Global Forecast 2023.

The increase in consumption for perishable foods would require more refrigerated transport & refrigerated storage. Emerging markets in the Asia-Pacific are projected to post the highest growth as it sees massive expansion in food retail chain industry.

“The refrigerated storage market is estimated to be dominated by the Asia Pacific region. Refrigerated storage capacities are growing in the Asia Pacific due to the increased need for reducing wastage of perishable foods. In North America and Europe, the refrigerated transport industry is booming, mainly due to the advancement of technology in refrigerated trucks, vans, trailers, andmaritime reefer containers,” MarketsandMarkets noted.
In the frozen cold chain market, dairy and frozen desserts will drive the highest percentage of growth due to their need for constant temperature control. The market is growing for these items especially in China where the government encourages daily consumption as main source of protein.

“Dairy & frozen desserts are witnessing high demand due to economic growth and rapid urbanization, along with sophisticated marketing channels, which have led to significant changes in dietary patterns. Government guidelines in China state that milk is a major source of calcium and protein, and recommend regular milk consumption, which has led to milk and dairy products being incorporated into the daily diet of consumers,” the report said.
In 2017, ice cream, meat and seafood which required temp-eratures ranging between -18 °C to -24 °C (-0.4 °F to -11.2 °F) drove the cold chain market to new growth.

When natural disasters strike, the air freight industry is also tapped to quickly and effectively deliver food, medicines, shelter and other supplies to victims.

In conflict zones, the weight is also on the industry to deliver vital life sustaining supplies. The United Nations says the world is facing the largest humanitarian crisis since its creation with more than 165 million people in over 40 countries in need of international humanitarian assistance. Across the world, over 815 million people are hungry and more than half of them are living in countries at war.

In 2016, the UN served 164.2 million people in 47 countries in need of humanitarian assistance with the majority located in just three countries—Yemen 21.2 million; Syria 13.5 million, and; Iraq 10.4 million. Yemen and Syria remain major concerns for the UN with just a fraction of those in need helped due to logistical challenge and limited funding.

Responding to these crises on a global scale requires methodical and systematic operation that requires rigid security and cooperation between aid agencies, organizations, air freight carriers, forwarders and countries.
Air freight plays a pivotal role in the delivery of food, medical supplies, shelter and other relief goods in conflict zones and this is particularly challenging in areas where infrastructures have been destroyed or under attack.

Away from the war zones, the UN must also provide for over a million Rohingya Muslims who began fleeing Myanmar by boat or on foot with barely any belongings to neighboring Bangladesh after a military crackdown in August 2017 that led to thousands of deaths and reports of rape and sexual abuse among women and girls.

The UN, which described the military offensive in Myanmar’s Rakhine state where the Rohingyas are deeply rooted as a “textbook example of ethnic cleaning” says it needs US$12.83 million to feed the refugees every month with rice, lentils, yellow split peas, vegetable oil and other food essentials flown by air freight carriers.

Managed by the World Food Program, the United Nations Humanitarian Service (UNHAS) mainly deliver humanitarian aid to different countries operating more than 92 chartered planes, 20 ships and 5,000 trucks on a daily basis.
The world’s largest humanitarian aid logistics hub, the International Humanitarian City, is located in Dubai hosting nine United Nations agencies and over 40 NGOs, making the emirate a vital link in facilitating first responses at a global scale to conflict zones and disaster areas in all corners of the world.

The International Air Transport Authority (IATA) described air cargo as “a trade facilitator that contributes to global economic development and creates millions of jobs. The global economy depends on the ability to deliver high-quality products at competitive prices to consumers worldwide. Air cargo transports over US$6 trillion worth of goods, accounting for approximately 35% of world trade by value” but in recent times its role had expanded to saving lives in areas where there are poverty and conflict.

Apart from food, the industry plays a crucial role in transporting medicines and vaccines to save lives in Africa and other parts of the world. Many major carriers support this move.
“The World Health Organization estimates that immunization programs will prevent more than 4 million annual child deaths by 2018. Air cargo is critical in flying these temperature-sensitive pharma-ceuticals in the best conditions, using cutting-edge technologies and procedures,” said IATA.