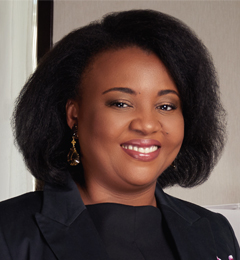 Mrs Fatima Beyina-Moussa, the CEO of Equatorial Congo Airlines (ECAir), was appointed to her current position, after the creation of the airline in March 2011.

Prior to the current position, Fatima served as the Economic
and Reforms Adviser to the Minister of Finance of the Republic
of Congo. In that capacity, she worked on the creation of the
National Airline and also managed the restructuration of the
National Insurance Company in 2010.

Fatima, who began her career as a Financial Auditor for Ernst and
Young Congo, later entered the Central Bank of Central African
States (BEAC) as a Manager in various divisions, before her
recruitment at the United Nations Development Program (UNDP)
Headquarters in New York as an Economist in the Special Unit for
South-South Cooperation.

As the CEO of ECAir, for the past four years, Fatima and her team
have been working to materialize the goal of the Congolese
government: to transform Brazzaville Maya airport into an
international hub. In an exclusive interview with Air Cargo
Update, Fatima discusses about her life, job and ambitions.
Excerpts from the interview:

What does a typical day entail for you?

I guess there is nothing like a typical day for me. Each day is
different. Each day is a new adventure, with new goals, new
meetings and new stories. Everything revolves around the
organization. Being the CEO of an airline and a mother at the
same time is not easy but with a bit of planning, I try to achieve a
lot every single day.

What is your current role?

As the CEO of ECAir, it is my duty to work towards achieving the
company’s ambition to develop its hub in Brazzaville by opening
further regional destinations.

What are the difficulties you face in your current position
and also operating from a difficult region like the Republic of Congo?

My experience as an African airline CEO is a very positive one
notwithstanding constant challenges. My hope is that a growing
number of women will seek the opportunity to rise to the highest
positions in the airline industry in Africa. Of course, you do face
difficulties when you operate from the Republic of Congo. But I
am a very optimistic woman and I have a great team. We always
try to transform difficulties into advantages.

How did aviation industry happen to you?

Upon returning to Congo, I joined the finance minister’s cabinet
as an adviser, and one of the key matters I had to deal with was
the establishment of a national airline. After working on the
project, I was appointed as the CEO when the airline was created.

If not aviation, which other industry would have you opted
for and why?

I would have seriously looked at economy and financial sectors.
You know, I studied this field and I was an economist before
being appointed as the CEO of ECAir. My job included managing
projects, setting up business plan, looking for funds etc.

Why do you think there aren’t many women in the aviation
industry?

There are only a few female African CEOs in the airline industry
and, this reality is unfortunately observed among other African
industries. I guess we need to encourage more and more women
to join the aviation industry, not only to be flight attendants but
to become pilots, managers, CEOS etc. When you look at ECAir for
example, more than half of our staff is female. It’s not a choice but
we discovered many talented women when we started recruiting.
We did train cabin crew, accountants, analysts etc. We are also
training female pilots and female managers as much as we are
training young men. I am very optimistic that women can play a
pivotal role in the aviation industry in Africa.

I love my mom’s hometown – Bamako. I am also a big fan of Dakar,
as well: two destinations among ECAir’s regional network.

African food remains my all time favourite. I love Congolese meals
like Saka-Saka and stuffed Safou (A vegetable that is a gold mine
of nutrition and health that’s yet undiscovered).