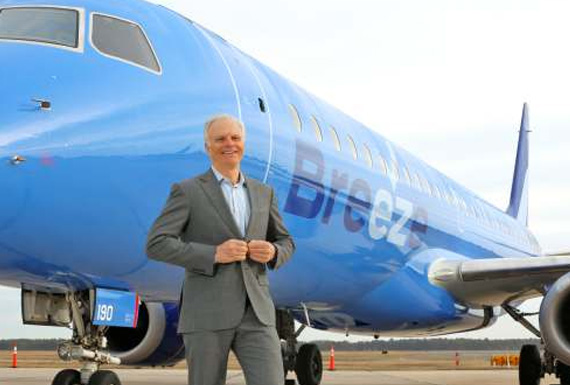 Family and people for this serial airline entrepreneur

The global aviation industry remains in a slump due to the pandemic. Not that many people dare fly despite the development of COVID-19 vaccines and new health and safety protocols in place.

But for some entrepreneurs, the situation difficult as it looks, still offers opportunities. And so on May 27, 2021, budget airline Breeze Airways was born to provide flights to underserved cities throughout the United States.

It took off easily with its slogan “Home of Seriously Nice Flights and Fares” backed up with its seamless booking, no change or cancellation fees and customized flight features delivered via a sleek and simple app. As of July, the airline serves 16 cities and nearly 40 routes across the US, with plans for more domestic and international flights.

On September 13, the airline which has a fleet of 13 aircraft, announced an order for 20 more Airbus A220-330 in preparation for its planned longer flights. The new order brings to 80 its total pending aircraft up for deliveries.

Behind this new airline is the entrepreneur who founded four other airlines—Morris Air, WestJet, JetBlue Airways, Azul Brazilian Airlines—within a span of 30 years, the Brazilian-American businessman and serial entrepreneur David G. Neeleman who is also part-owner of Tap Air Portugal.

Neeleman who was dubbed as the “Steve Jobs of the Skies” says he believes flying is the greatest privilege and opportunity that we could all have and that it should be affordable and a genuinely nice experience for everyone.

The Dutch-descent Neeleman was born in Sao Paolo, Brazil where his father worked as a foreign correspondent for UPI and later became bureau chief for Latin America. The family stayed there until he was five before moving back to Salt Lake City, Utah in the US.

At 19, Neeleman served for two years as a Mormon missionary in Brazil, spending time with the poorest of the poor and the downtrodden, an experience he described as humbling that made him vow to serve the Brazilians and others in whatever way he can.

“When I was living there as an expatriate child and visited as a teenager, I ran with the influential people and the rich. Then I went back to Brazil and lived with the poor. And that contrast really annoyed me. It made me want to do something to make a difference for the lower classes and that’s what we’re doing-creating air travel for the bus fare,” Neeleman told the Business Jet Traveller in an interview when asked how his experience as a missionary affected him.

Neeleman would occasionally return to Brazil where he also holds a citizenship. In 2008, he made a milestone when he founded Azul Linhas Aéreas Brasileiras S/A, a low-cost quality carrier. It created jobs and the opportunity for poor Brazilians to travel across the country and overseas.

Despite his busy schedule, this divorced father of 10, now with 24 grandchildren, always make it a point to spend time with his family, be it in sports, school performances and other activities, where they can connect and exchange ideas.

Always compassionate and a dreamer, Neeleman once told the Deseret News, “The more people you touch, the more good you do, the more lives you change, the happier you are.”